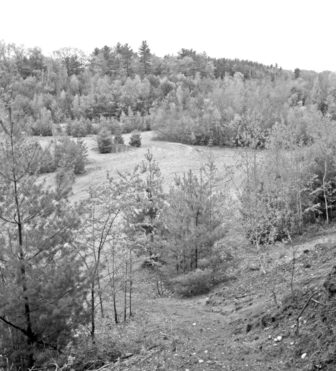 This view of the sand pit property, looking down from Lake Road, shows the previously excavated region where the relocated road will be routed.

The court decision reported last month, restoring the Zoning and Planning Commission’s 2014 approval of reopening the Lake Road sand pit, required that the road be relocated onto previously excavated land, with the implication that permission for residents’ use of the road would continue. As this report is being written, road work has not yet begun, nor has there been any new action on site for sand excavation. Shortly after the March 30 decision, Scott Guilmartin of Lake Road Materials said that the operation was not expected to start immediately. Also, there have been no new developments in the legal status.

In a related matter, Town Attorney Derek Donnelly wrote to Attorney Ed McAnaney on March 28, asserting that McAnaney’s prior efforts on matters concerning litigation about Lake Road mining when he was town attorney and later when he was first selectman made it inappropriate for him to represent litigant Paul Pellerin in the more recent sand pit matter. Donnelly added, “The Town is still reviewing its options with respect to this conflict.” An answering letter was sent on April 4 by a lawyer representing McAnaney, countering the assertions. He stated, “Nevertheless, although we disagree with your conclusion, in an abundance of caution I have advised my client to withdraw from the matter, provided it doesn’t jeopardize Mr. Pellerin’s rights.”

At press time, the Town had no further comment on this conflict.