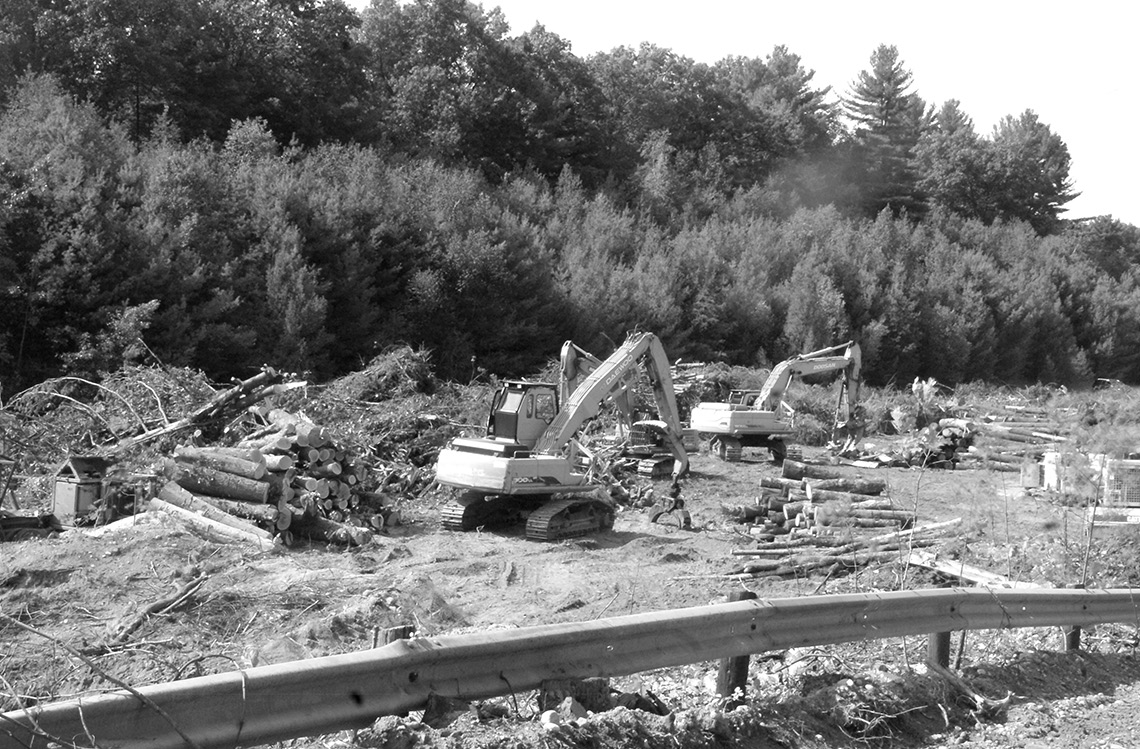 Big machines are shown at work in mid-September in the Lake Road sand pit. They are processing the remains of the trees removed from alongside the initial stretch of the road. This site preparation was being done for new owner Crestview by Moosehead Harvesting, whose local headquarters are on Austin Street.

A September 1 news bulletin from the First Selectman’s office advised that the land parcel containing the controversial sand pit on Lake Road had changed hands. About a week earlier, BGR Materials, LLC, had purchased the land from Lake Road Materials (LRM), the Suffield company that had successfully preserved its permit to resume excavating sand and gravel on the 74-acre property.

New owner BGR Materials is part of Crestview Construction, a family-owned site preparation contractor in Southwick that has been in business since 1983. (The materials division was named after the three grandchildren of the two principals of Crestview.) Along with the newly purchased land, the new owner acquires the excavation permit reaffirmed last winter, including all of its associated conditions.

Crestview Vice President John Dziengelewski explained to this reporter that he has also agreed to help the Town improve the first 1,000 feet of Lake Road, the segment whose abandoned ownership the Town intends to assume. He has already cleared the trees lining that segment, which had stood in the way of widening. He has also improved the road’s gravel surface.

In addition, Crestview is improving the alignment of the planned relocation of the longer portion of Lake Road, which will run through the previously excavated region south of the present alignment. The relocation will start at a spot farther east than in the LRM plan, reducing the length of roadway that residents’ traffic will share with sand and gravel trucks. As in the LRM relocation plan, there will be a bus-turning circle where the new road meets Colony Road. Dziengelewski said that no mining will start until the relocation of Lake Road is complete, which he expected to be within a very few weeks. In the meantime, the existing Lake Road will remain available.

The new owner mentioned that he had excavated material from the Lake Road sand pit some years ago, before the now-renewed permit was allowed to expire. He said that Crestview had mined north of the road and Ed Rodzen of Suffield had operated on the south side.

Publically available Suffield land records show that the purchase by BGR announced in the bulletin, which included several smaller, undeveloped, nearby parcels as well as the 74-acre piece, took place on August 22 at a price of $1,500,000. LRM had purchased the 74-acre property on January 26 at a recorded price of $144,000. The smaller parcels were also transferred to LRM that day, for $56,000.

Back in 2014, the Congamond Lake Environmental Protection Organization (CLEPO) had appealed the issuance of the excavation permit. In 2015 that appeal seemed to have been successful, but LRM filed a counter-appeal.

The January 26, 2017, purchase by LRM occurred about three weeks before it became known that the litigant who was the official abutter in CLEPO’s appeal had withdrawn from the case.  The loss of a qualified litigant allowed LRM’s counter-appeal to succeed, restoring the permit.