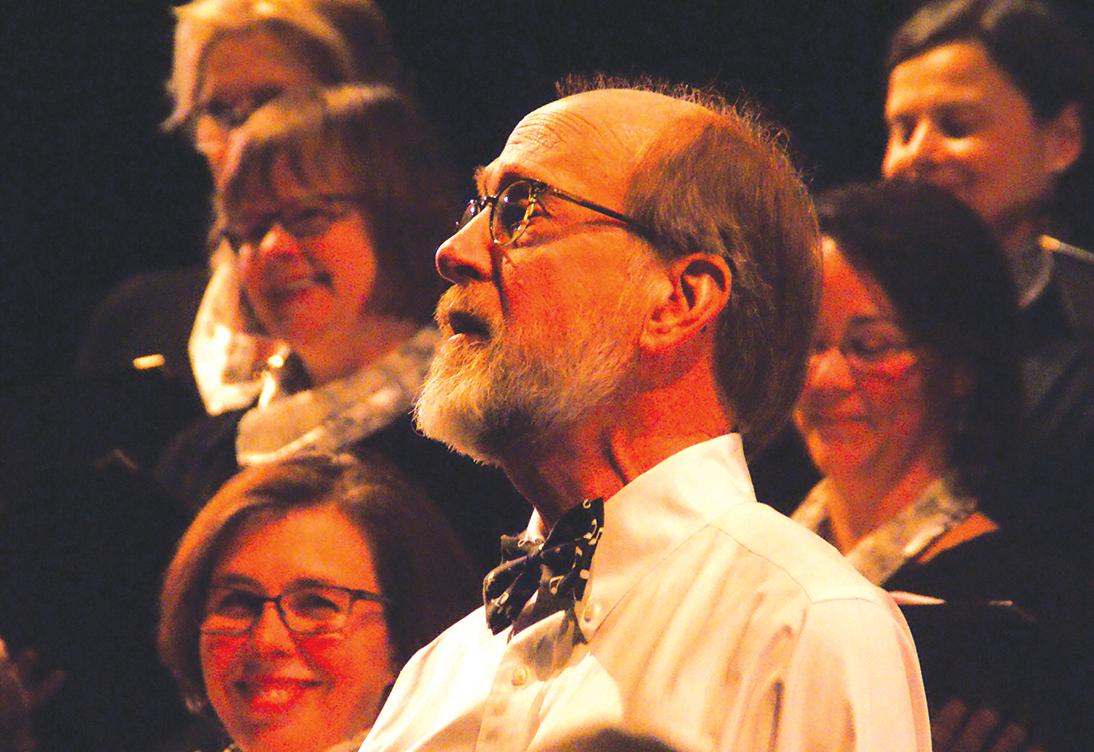 As a member of the Second Baptist Church Sanctuary Choir, Larry Peters sings a short, solo introduction to one of the choir’s two pieces in the Suffield Sings! concert on February 11.

That’s what the organizers called this unusual concert, presented to a well-filled Suffield High auditorium on Sunday afternoon, February 11. The idea for a free concert by many different musical groups in town came to Noah Smith soon after he arrived here two years ago as the music minister at the First Church of Christ, Congregational. Skilled in many instruments and now established as an independent music teacher along with his church work, he approached Suffield schools and churches and put together what turned out to be a great success.

Five different school groups and three churches were represented, with smooth, fast transitions from one to another on the risers in front of the stage. The groups ranged in size from 11 to about 35, with occasional brief solos and sometimes a piano accompaniment, all packed into a fast-paced 70 minutes.

The concert started with the youngest groups, the Suffield Middle School Elite Voices and that school’s larger Festival Chorus, both led by teacher Laura Noonan. The Elite Chorus’s “Lost Boy,” a sweet, nostalgic musing from Neverland, was particularly notable.

Organizer Noah Smith directed First Church’s Chancel Choir in two numbers, one a spritely “Lord of the Dance,” the other including Susan Hastings’ brief solo as part of “Somebody’s Prayin’,” an excellent spiritual.

Evelyn Battle and the Second Baptist Church Sanctuary Choir had some fun with their first piece: They offered “Give Me a Choral Medley” with snippets from Gilbert & Sullivan, an American western, and many more quick references, including a bit of the “Halleluiah Chorus”, from The Messiah. The audience really responded to this enthusiastic spoof. The choir followed with a serious psalm, showing great skill with the harmony.

Chelsea Kane led the Suffield Academy Chorus in “Wanting Memories,” a recent meditation by Yasaye Barnwell. This was a complex African-American piece, thoughtfully presented with considerable effective polyphony. Then a second Academy group came out, oddly identified as Advanced Vocal Techniques and Staging. They sang “A Million Dreams,” the childhood hopes of P. T. Barnum, from The Greatest Showman. An enjoyable piece, but the significance of the group’s name escapes this reviewer’s limited perception.

The final group to come out was Gretchen Collins’ Sacred Heart Church Choir, who offered three skilled performances: “Sicut Cervus” a Renaissance psalm by Palestrina, “The King of Love My Shepherd Is” by contemporary composer Dan Forrest, and “Contate Domino,” by 16th Century Italian Monteverdi. This was a wonderfully diverse set, variously psalmy, sweet, and happily spirited, all very well performed.

Then all the other groups came back, crowding on stage and the risers and settling down in very short order to finish the concert with two numbers, both under Gretchen Collins’ direction: “Things That Never Die,” by contemporary composer Lee Dengler from Charles Dickens’s deeply thoughtful poem, and “My Song,” a contemporary piece advertised as “A gorgeous way to close a concert for mixed choirs.” “My Song” was certainly that, and the Suffield audience responded appropriately.

One can hope that this successful fulfillment of Noah Smith’s conception will become an annual tradition.

Next Article
Nature’s Sculpture
The tip of a Japanese Maple branch, encased in ice in bright…