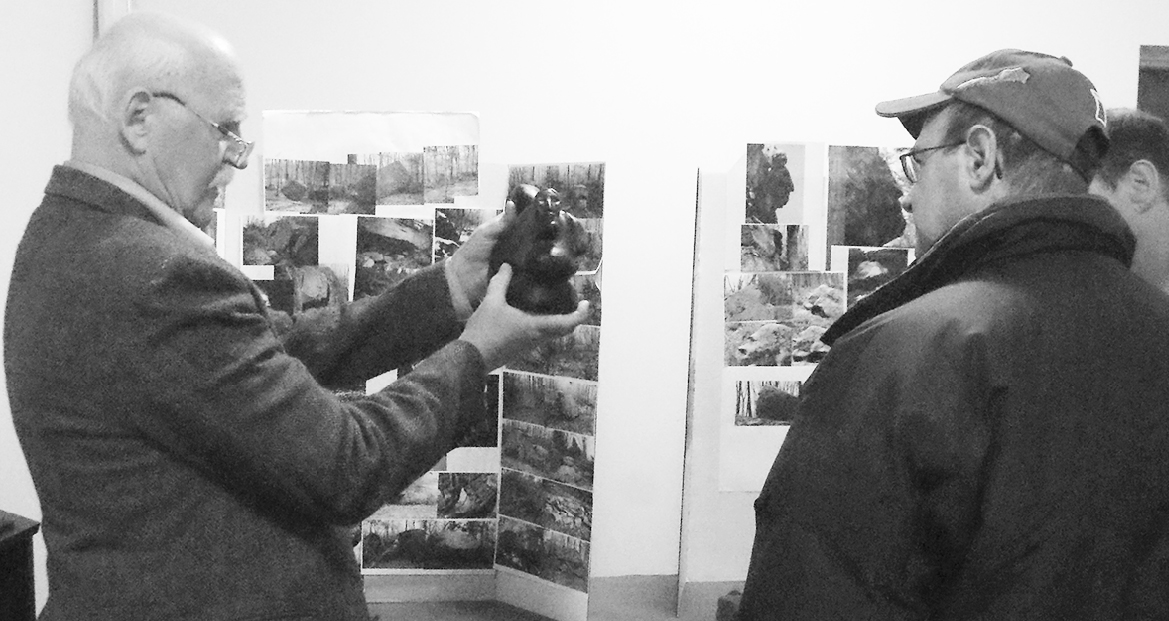 Amateur archeologist Geoffrey Whittum shows a most unusual carved and polished rock to an interested attendee at his February 27 Suffield presentation. The rock’s top center protuberance, as pictured, was definitely a human face.

Geoff Whittum, who came to Suffield some years ago from his upbringing in Ellington, calls himself a Woods Walker, a delightful term that fits his avocation of exploring the natural environment in New England. Recently he’s been sharing stories of the amazing things he has found in his walks. After his well-received presentations at libraries in Bloomfield and Granby, the Kent Memorial Library sponsored his February 27 appearance at the Suffield Senior Center, where a full-house crowd was fascinated by his photos of strange and wondrous shapes of rocks.

Whittum showed images of giant boulders resting precariously on two or three small ones, oddly shaped individual boulders, strange dug-outs and caves, and other challenging configurations of rocks. Adding to the fascination were his descriptions of their orientation with solar occurrences and the relationships of these odd rocks with other rocks at various distances.

Most importantly, he sees evidence that these arrangements and configurations were created intentionally by earlier civilizations or even by alien visitors, hundreds of thousands or even millions of years ago. And on many of the rocks, he pointed out images, mostly of faces and creatures, which he feels were carved by ancients  creators.

Among those present at the Suffield lecture, it seemed as if most were fellow believers or at least fellow seekers of a full understanding of the topic.