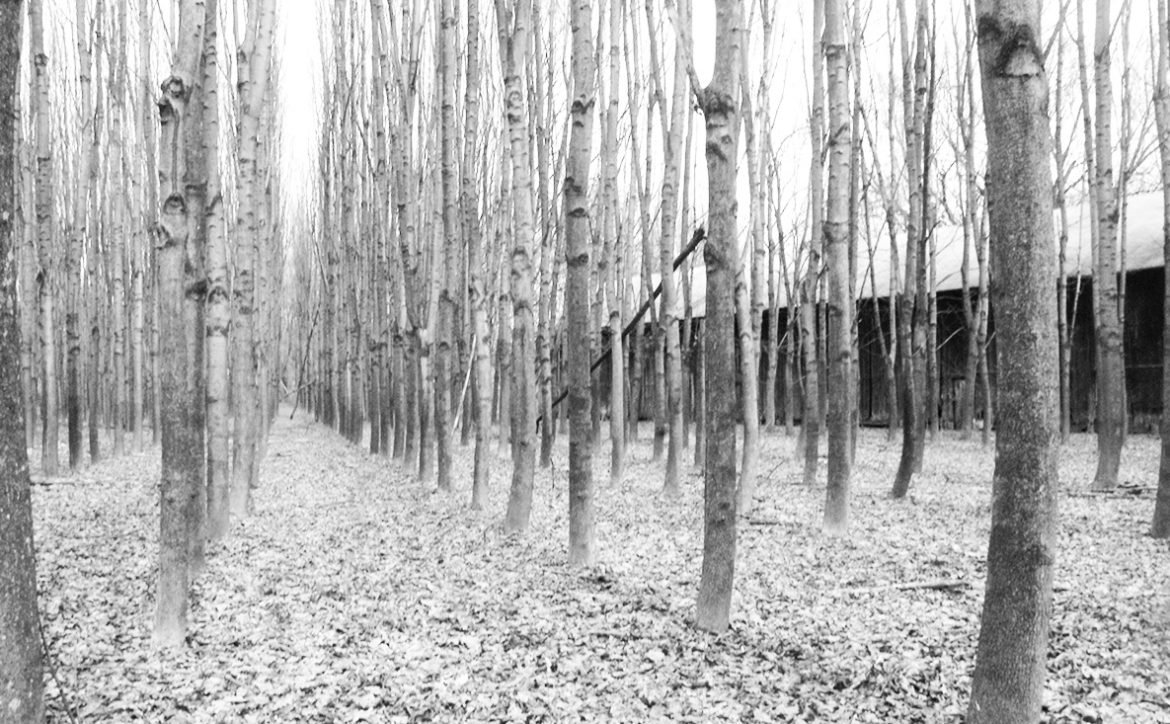 Some of the former Kogut nursery property on the Bissell Farm is still occupied by unsold trees, now likely too tall and slim for harvesting. This grove is south of Kingfisher Lane, off Plantation Drive. The tobacco shed in the background is behind houses along Magnolia Drive.

A recent land purchase in Suffield, the second largest parcel sold in recent decades, caught the attention of residents who feared a new subdivision was coming. They were pleased to learn that the buyer was a tobacco grower, and he was already preparing the land for planting. It was Robert P. Nowak, who has seed beds on Suffield Street and fields in that vicinity near Windsor Locks, who recently bought the 157-acre Bissell Farm, extending north from Mountain Road across from Spaulding School.

Located in the geographic center of the town, the new Nowak parcel, once part of the Consolidated Cigar Corporation, has an interesting history. In the heyday of shade tobacco growing almost a century ago, the Bissell Farm (named for L. P. Bissell, the most prominent tobacco baron in town at that time) was a profitable shade tobacco plantation. Kogut Enterprises, a Meriden tree nursery, bought the property in 1985 along with smaller parcels on Sheldon Street.

In 1987, a disastrous fire destroyed Kogut’s warehouse on the low ridge along the western edge of the property, and fire-fighting water suspected of containing fungicides and other chemicals poured off the blaze and ran down onto the fields. The farm was declared a superfund site in 1996, and with federal support late that year, hundreds of rusty 55-gallon drums were removed to a hazardous material incinerator in Arkansas.

A few years later, the Suffield High School Building Committee considered purchasing the Bissell Farm as a site for the new school and perhaps other municipal facilities. According to a member of that committee, Kogut offered to sell the entire parcel, but at no less than $1,500,000, which was half a million more than the committee’s budget could support. (In 2000 the Town bought Kogut’s 60-acre property on the north side of Sheldon Street instead, for the budgeted $1,000,000.)

The Bissell Farm, viewed apprehensively after the fire by many, lay fallow for years, used only for public event parking and a temporary depot for wood chips after the 2011 ice storm clean-up.

In 2004, aging pop singer Daryl Hall, of Hall & Oates fame, bought the large house on the Bissell Farm diagonally across Mountain Road from the Spaulding School parking lot. Built in 1784, it had been owned by Capt. Oliver Hanchett of the Revolutionary War and was restored in Colonial Revival style by L. P. Bissell in about 1900. Hall had the house disassembled in the summer of 2004 and rebuilt as part of his estate on Cascade Mountain near Amenia, N. Y.

Kogut’s sale of the Bissell Farm, now house-less, to local farmer Nowak took place on February 5, 2018, in a $1,000,000 transaction. By the end of February he was bulldozing brush and scattered tree clumps, preparing for cultivation. The Observer has been unable to contact Mr. Nowak for more information on his plans.

For those who may ask what was the larger parcel that changed hands in Suffield recently: It was the Babb’s Road farm of Culbro Tobacco across from Babb’s Beach and extending north to the state line. That entire farm, with 196 acres in Suffield and 254 acres adjacent in Southwick, was acquired in 2008 by the two states separately as a wildlife management area, compensating Mother Nature for the depredation that continuing development has inflicted on her.