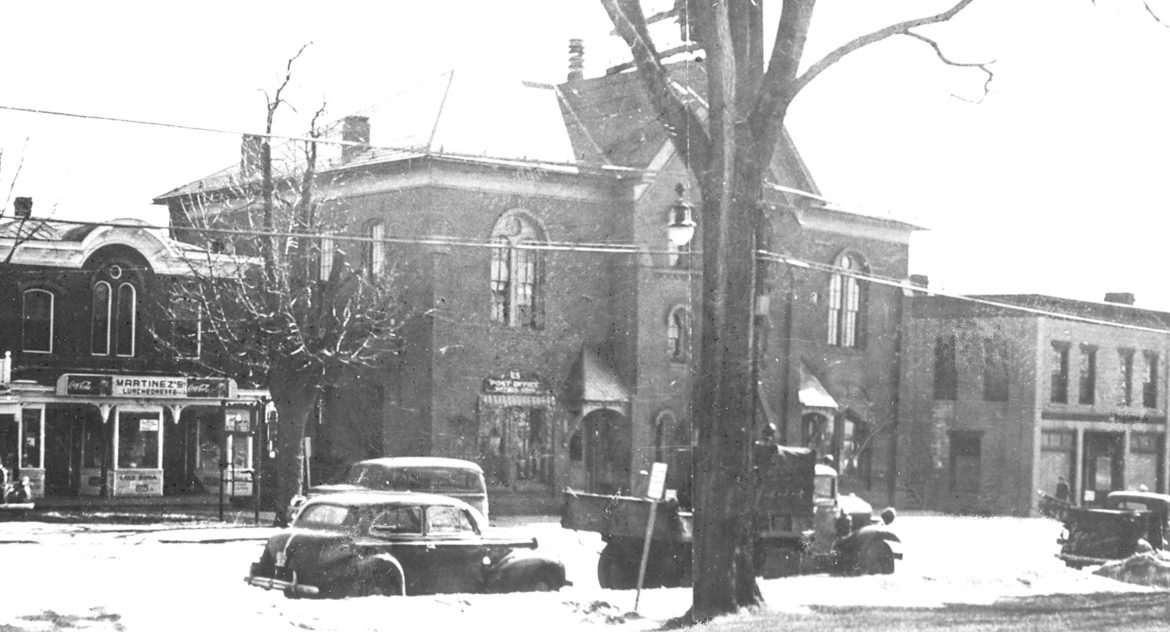 This is the center portion, touched up a bit, of the multi-image panorama of Suffield Center taken by Richard Bell in the winter of 1946 and ‘47. The Suffield Town Hall dominates the image, with the Post Office in the left door and the Clerk and Selectmen at the right. The center door led to the courtroom on the first floor and stairs to the big meeting room above. When the building was built in 1861, the Town Hall was shared with school rooms at the left and right below. At the left is the two-building Martinez store, with the grocery at the left edge and the luncheonette next door in the brick building. To the right of the Town Hall is William Cooper’s funeral chapel and his office, which offered several services. The center door led to Dr. L. N. Hilditch’s office and home above. Next door, at the right edge of the picture, was “Doc” Caldwell’s Suffield Pharmacy and Fred Bongiovanni’s confectionery. Between the Town Hall and Cooper’s, a narrow alley led down to the Police Station under the Hall and the Fire Station just behind. There were more store fronts along Main Street both north and south, including two more groceries: an A & P and a First National. A pretty good copy of the full panorama hangs in the entrance lobby of the First National Bank.

Next Article
An Evening with Edgar Allen Poe
The Suffield Historical Society will meet on Wednesday, September 19 at 7…