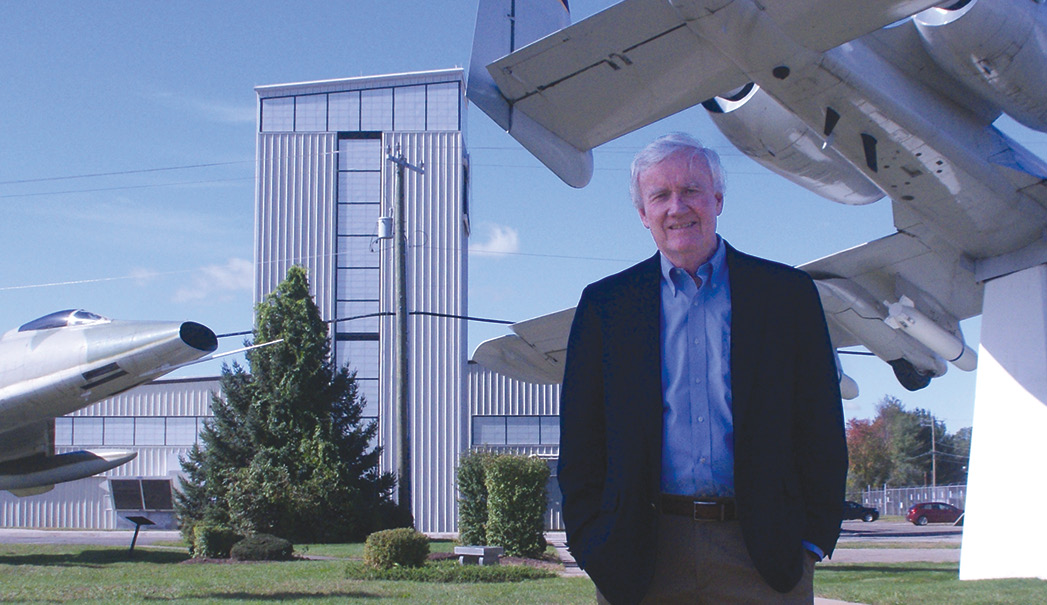 Major General Thaddeus Martin, USAF Ret., can enjoy his home in Suffield and relax in civvies during a recent visit to the Connecticut Air Guard’s base at Bradley International Airport now that he’s retired as head of the Connecticut National Guard after 41 years in the military. He is pictured here with two of the three aircraft mounted on “sticks” at the entrance to CANG’s 103rd Airlift Wing’s base on the west side of the field. At the left is an F-100 Super Sabre, at the right an A-10 Thunderbolt; unseen beyond at the right is an F-102 Delta Dagger. The 103rd flew all three at Bradley and now operates eight C-130 Hercules transports.

If ever there was a man who knew the meaning of the word “dedication’ it would have to be Retired Major General Thaddeus Martin of the Connecticut National Guard.

Thad, as he prefers to be called, has devoted his life to the military and to his family. He has managed to stay low-keyed when it comes to other interests so that he can stay dedicated to his job and to his family, although he does enjoy an occasional game of golf. Many of you may recognize him from his speeches on Memorial Day after the parade at the Veterans Memorial Park.

As a young man, Thad wanted to manage his own life in his own way. He attended Park College in Missouri and Golden State College in San Francisco. He strove to build on his own strength to form a career. He joined the Air Force in 1977 where he met his future wife who was also in the military. He got off active duty in1980 and started recruiting for the Air Force, but returned to active duty in 1990 where he became Chief of Supply.

After two years he and his family returned to Connecticut where he served as Chief of Maintenance as the Maintenance Squadron Commander of the Air Guard. His previous work had prepared him for this leadership role because he had worked with  F-15 and F-16 fighter planes. This role saw him training personnel, preparing documentation, and learning new technology for the Air National Guard. He has flown supply missions to Bosnia and Kosovo from Italy and from Kuwait to Iraq to enforce the no-fly zone

In 1996 he became the Logistic Group Commander and from there the Vice-Wing Commander, then the Assistant Adjutant General of the entire Connecticut National Guard. When he retired three months ago he had served as the longest serving Adjutant General in the United States. Thad feels that he was successful in his career because he always worked to advance people and his organizations and because of this he was able to pick his own replacement. He held it important to making a difference in the lives of his recruits where he recruited them, trained them and equipped them. He is positive that his servicemen are as well trained and equipped as those serving in the regular armed forces. All of the guards are volunteers so retention can be a major problem.

The Guard actually serves two masters – the State and the Federal Government. The state uses the Guard as its militia and for emergency situations within the state. The Federal Government can call them up to serve in areas devastated by hurricanes, floods and wild fires, and can deploy them overseas during war time. They are trained and ready to go when needed.

Thad’s wife, Kerry Martin, Lt. Col., was deployed once  for three months, leaving him to be mom and dad to his two sons. He found this to be one of the hardest jobs he ever had to do with both boys going in opposite directions and no real life training to do this parenting. He is proud of his two sons and two grandchildren. He has kept a low profile over the years because of the demands of his career. Now he is planning what to do with the rest of his life! Whatever that may be we know that he will be successful and do it his way.

Next Article
Candidate Debate
Sponsored by The Suffield Observer, with the Democratic and Republican Town Committees.