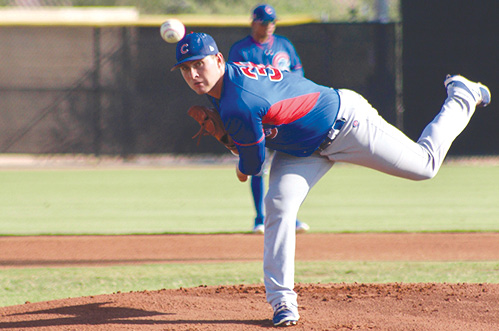 Photo provided by the Patterson family

When Jack Patterson was shagging flies for his First Church team in the Suffield Little League, his dream was like that of young boys everywhere – to be a baseball player when he grew up. Fast forward to June 2018 and Jack’s dream is coming true as he was drafted by the Chicago Cubs in the 32nd round of the MLB draft. While he still has a long way to go before playing in the Major League, Jack has already beaten the odds. According to NCAA statistics for the year 2016/17, only 7% or 34,198 of the 486,567 playing high school baseball play it in college. Of that 34,198, just over 2% or 735 are drafted by professional teams.

While it was a dream, it didn’t really occur to Jack that he could play baseball for a living until late in his college career. “My real love as a boy was soccer, which I played year-round, but when I got to Suffield Academy, soccer wasn’t as big as it is at the high school and I put more energy into baseball.” Jack played in the outfield and hit well during his first two years. A southpaw, he moved to the mound for his junior and senior years and was selected New England Prep League pitcher of the year. Also, during his high school career, he played American Legion baseball and spent a year on the Storm, a western Massachusetts AAU team.

His pitching garnered the attention of college coaches and he was a couple of days away from committing to UConn when he got a call from Bryant coach Steve Owens. Owens wanted to see Jack pitch and asked what his schedule was. Serendipitously, Jack had a game that very day in Providence, RI, which is just down the road from Bryant. Owens came, saw, and offered Jack a position on the team with a partial scholarship. Jack liked what he saw at Bryant and decided to become a Bryant Bulldog. 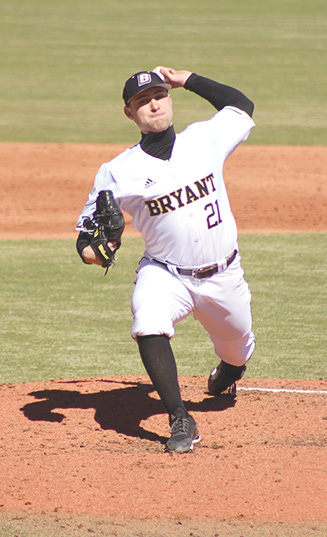 Photo provided by the Patterson family

In college, Jack was a record-setting pitcher for Bryant.

After going 3-0 with a 3.41 earned run average (ERA) in his freshman year, Jack was hit in the head by a line drive four weeks into his sophomore season, sustained a concussion, and missed the remainder of that season and all of his junior year season. “I just couldn’t focus on the mound and ended up not pitching for 18 months, but I kept in close contact with the team and Coach Owens,” he reported. Returning to the mound as a red shirted junior, he went 4-0 with three saves and a 2.90 ERA that year and went on in his senior year to become the best left-handed power pitcher in Bryant program history. He was just the second Bryant pitcher to strike out more than 100 batters and garnered Northeast Conference honors as the NEC Pitcher of the Year in his senior year.

During the summer Jack played in the Northeast Collegiate League and met with MLB scouts. He knew that if he were to be drafted it would happen on the draft’s third day. On that day he was at Suffield Country Club preparing for a round of golf with his father when he got a text from the Tampa Bay scout. He was too nervous to golf and went home to wait for a call. After three and a half hours, with disappointment sinking in, he received a snapchat from a friend congratulating him on being selected and five minutes later got a call from Matt Sherman, the area scout for the Cubs. Within a couple of days Jack was on a plane to the Cubs spring training complex in Arizona and signing a contract. He was told that he would probably be used as a relief pitcher, which is more mentally taxing than being a starter since you never know when you will go in or for how long, so it is harder to prepare yourself.

He played most of the summer in Arizona but was called up to play in the Cubs A league team in Oregon. Although that team had the worst record in League history, they pulled it together for the last half of the season and made it to the playoffs, where they won the whole thing on a walk off balk!

During the season, players put in a roughly 12-hour day. They report to the training facility around 1 p.m. to receive treatment, if needed, and warm up. Lunch is at 1 p.m. followed by hours of running, throwing, hitting, and shagging flies for batting practice. At 5 p.m. the team has a snack and gets ready for a game at 7 p.m. After the game the team returns to the facility for dinner around 11 p.m. and leaves for home around midnight. Every five days they have a day off.

In the offseason, at present, Jack is working mornings on a local alpaca farm where he feeds and waters the animals and “shovels poop”. He also assists the Suffield Academy soccer team before heading to the gym to lift for a couple of hours.

On March 3 Jack will report for 25 days of spring training, after which he hopes to be assigned to the A league team in South Bend, Indiana. If he does well there, he could advance to the A league team in Myrtle Beach, which would be the “cherry on top” on his path to the major league. Regardless, he is chasing his dream and we at the Observer wish him the best!

Next Article
SHS Teacher Heads for Antarctica!
Suffield High School is sending one of its own to Antarctica. SHS…