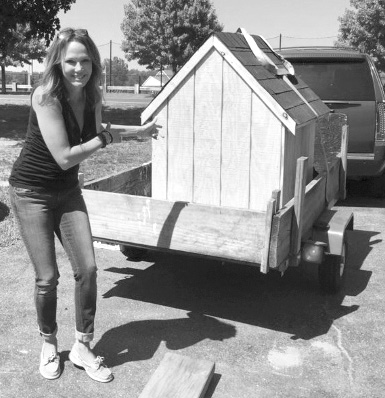 Project originator Susan Panaccasio is pictured with one of the dog houses her non-profit project has provided to selected families.

Local resident Susan Panaccasio created Project Pet Houses from an idea she had three years ago. The non-profit operation provides free houses for dogs (and feral cats, who otherwise live outside most of their lives). She realized it was crucial for pets to have shelter, especially during extreme weather.

Shelter for these animals is especially crucial during the winter and summer months. During the winter, dogs and cats can suffer from hypothermia in just 40-degree temperatures, experiencing frostbite, seizures and even death. Similarly, during summer months, they are prone to suffering from heat stroke, cardiac arrest, and death. Animals without shelter are also exposed not only to weather elements, but to predators as well.

In 2016 and 2017, the project built custom dog houses with the help of Suffield Rotary and Suffield Boy Scouts of Troop 66. However, due to the high costs associated with building and shipping the completed houses, they now send prefabricated houses, unassembled, right to the doorstep of one’s home. So far this year over 30 houses have been donated, all throughout the United States. The goal for 2019 is to donate double that amount. Susan also hopes to teach the pet community how important it is to supply their dogs and feral cat colonies with proper shelter. Most importantly, Project Pet Houses wants to save lives.

The dog houses are donated free, strictly on a priority needs basis. Anyone who is interested in receiving one is asked to visit www.projectpethouses.com and fill out an application. The information will allows the group to learn about the animal and the severity of its needs. Project Pet Houses has also donated bags of food, bedding, vet services, and even heated houses!

The project is 100% non-profit, relying solely on donations made by supporters to keep this project funded. Social media has been used to create awareness about Project Pet Houses, and the website has been viewed all over the world, including China, Pakistan, Turkey, Chile, and Ireland. Money was raised from fundraisers on Facebook, 50/50 raffles, local events, and through the generosity of all Project Pet Houses supporters who want to sustain the work.

Susan feels that Project Pet Houses has not only changed the lives of many animals but has also educated their owners about how important it is for all animals to have adequate shelter. Many pet owners are very open to learning and have now brought their dogs inside or have interacted more with them as a family member. Education is everything, and without it, animals can suffer unnecessary death.

The next fundraiser will be held at ION Restaurant in Middletown on December 4. All proceeds from anyone dining there between the hours of 11:30 a.m. and 9 p.m. will go to Project Pet Houses. Susan says, “Remember, every dog needs a woof!”