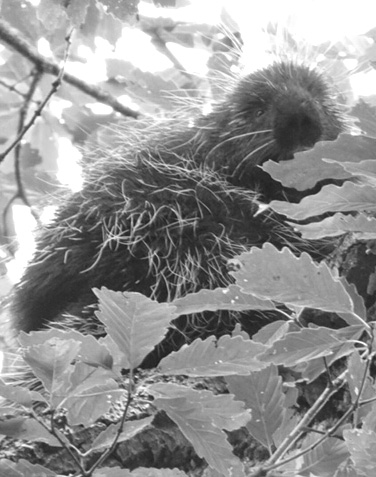 Porcupines do not like to pose for the camera; this was the most photogenic of the pair spotted.

Our weekly pilgrimage on the trails around town helps us to lead a wide awake life. Earlier this fall, I had launched into one of my endless narratives while climbing the hills; my friends may or may have not had their hands clapped over their ears, but their peace on the trail was short-lived, as my faithful pup uttered a strange bark and bounded off after two woodland creatures. She was in hot pursuit of a pair of porcupines. I watched as they headed towards the nearest tree. They were still on the ground, so I needed to rein in the pup, and I resorted to all the tricks I had learned at the dog obedience class which we had pretty much flunked earlier last spring. By some miracle, she came back to me before accumulating any quills in her muzzle. Then it was time to locate the camera in our packs. Fortunately, my trail mates run a tight ship and were wielding their Nikons in no time. I was holding the leash in my teeth and rummaging through my ruck and my claptrap, with no camera to be found. Extra socks, field guides, Milky-Way bars, notepads, bandanas and my DIY suture kit were spewing onto the ground. I coaxed the contents back into the bag and headed for the base of the tree. By this time the porcupines were showing their skills as arborists as they scaled a waif of a hemlock and were peering at us. We happily returned the favor.

After the pictures were taken, we parted ways. I revisited the episode as I am known to do, and the seconds that led up to the encounter, complete with a porcupine gnashing his teeth at us, before hightailing it to the tree. I was reminded that this was not the first time a rodent was chattering at me. Back when I was a kid, we bought a few guinea pigs from a breeder who happened to live on Boston Neck Road. It was very exciting back in the day to have locals raising such exotic pets, and we did our part to keep them in business. We brought a few home and within a week felt sorry for them in their cages. We hounded our mom to let them free range in our family room. She acquiesced, and, they would hide under the wing chairs and scoot across the carpet like sausages with legs. Some were more temperamental than others, and they would peek their heads out from under the chair and chatter their teeth at us. We gave the chatterers their space while their littermates hung around the house plants or begged us for crackers. Since I had some experience with the chatter of a rodent, I knew it translated to the need for space, and apparently my pup did, too. But enough about domesticated rodents, these porcupines had the ultimate in free range….the Metacomet!

Back at home, I looked up porcupines. An adult porcupine weighs between 12 and 35 lbs. Their bodies are covered with over 30,000 quills which lie flat unless threatened. Like any rodent, they have large front teeth for gnawing and eating twigs, bark, leaves and berries. Despite what the cartoons portray, they are not able to throw the quills, but it is wise to give them some space as the quills are a pretty effective mode of defense. Porcupines prefer deep woods, and these critters are the first I have seen in town. They are usually nocturnal and mate in the fall and bear young in the spring. They lead a mostly solitary lifestyle and do not hibernate in the winter, but seek out dens when the weather is extreme.

If you are not impressed with all this cool stuff about porcupines, it is theorized that back in the early days, porcupines arrived in our neck of the woods via vegetative rafts coming across the Atlantic. That still seems like one impressive feat to me. And now, etched upon my brain, is the image of the ancient quill pig floating around on some flotsam, never buying into the “world is flat” malarkey. Care to share that vision?

Next Article
Ever Dream of Editing?
Editors of the Month meet with the editor in chief to determine…