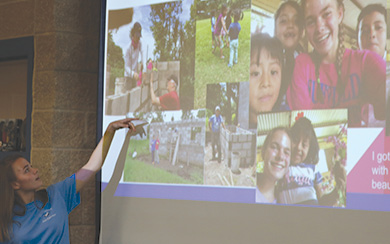 Once again, at Suffield High School the World Languages department has continued their fall tradition of celebrating the heritage of Spanish speakers in the United States and throughout the world. On Morning Update, the daily news show featured anchors who shared information about the selected Spanish-language music of the day, along with conversation and cultural perspectives in Spanish. Karissa Stanio, Kristen McCarthy, and Michael Grigoriou hosted the show or worked on preparing and writing scripts and visuals for the show.

To help get the message out to our school, Shreedula Balakrishnan and Lindsey Kasperski from the World Language Honor Society, with assistance from the Art Club members, coordinated the cultural display focused on this year’s theme: “One Endless Voice to Enhance our Traditions.” Another member of the Society, Kyle Englander, organized a donation drive for the Brazos de Amor – a non-profit organization helping fight poverty in Latin America.

The core event of Hispanic Heritage Week this year was a presentation and discussion given by Karissa Stanio and Paige Anderson, both juniors at Suffield High School. Karissa spoke about her volunteer experiences in El Salvador last summer, which were clearly extremely inspiring to her. Karissa spoke about the team spirit of those she worked with building houses for people in need, along with the impact on her language skills. She was happily surprised at how much her communicative skills in Spanish improved and kept a journal in which she wrote regularly in Spanish. She never thought she would be able to write as comfortably and expressively as she was able to, while she could also converse successfully with the many local people working hard to construct homes together.

Paige did similar volunteer work in Costa Rica. In fact, Paige is a French student at SHS, and she was delighted at how quickly she picked up some Spanish and was able to get by. She also spoke passionately about what an enlightening and inspiring experience it was to meet people in this country and have a window into their lives and relationships. This was particularly the case with the small children who were around their volunteer group, who loved befriending the young Americans.

After Paige and Karissa spoke, the group in the Media Center asked questions about these experiences. World Language teachers Mr. Shultis, Ms. Kruk, and Mr. Casinghino shared some of their own experiences traveling in Spanish-speaking countries, including highlighting the diverse locations one may find in various areas. In particular, many of the cities one finds in this hemisphere offer quite diverse, vibrant economic opportunities for their inhabitants, such as in Costa Rica, which is not only a major tourist location but also boasts strong tech industries.

Thanks to the members of the World Language Honor Society, the Morning Update team, and all students and teachers of Spanish who made this celebration such a successful one.