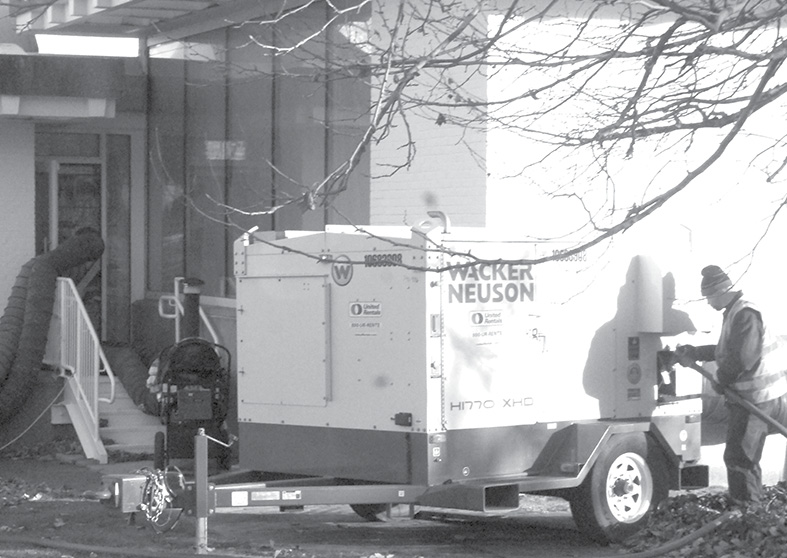 A fuel supplier refills the tank of one of the temporary heaters at the library in late November. This heater sends its hot air through a flexible duct into the old lower lobby. Two smaller heaters at the left are sending heat through the new northwest emergency exit.

The PCB abatement grit-blasting work at the library was concluded near the end of November. Ceilings and floors have been cleared of the coatings and adhesives that were the suspected sources of airborne PCB contamination discovered in tests at the end of 2015.

The consequent PCB mitigation delay in reopening the renovated and newly accessible building has been vexing to many. But in mid-January, members of the Kent Memorial Library Board began planning a grand reopening — with the date still uncertain. There is light at the end of the tunnel.

In early December, following the resignation of Facilities Director Julie Oakes, First Selectman Melissa Mack announced that the Town had hired a consultant as project manager for the remaining library work. He is Craig Schoner, an experienced home improvement contractor doing business as Residential Homecrafts. He is listed on-line as a one-man operation.

(Oakes had been hired in 2013 as Facilities Manager. She became Facilities Director in 2018, the top executive of the facilities side of Public Works, with one professional assistant, after Public Works Director John Cloonan had resigned earlier in 2018. The Highway Department now reports separately to the first selectman.)

First Selectman Mack reported to the Board of Selectman on December 12 that the library would not open in February as she had hoped. On January 9, at their next meeting, she said “One month from today, work can start on the other items.” She was counting on satisfactory results from the final air quality tests to be run following the encapsulation work (a. k. a. painting) then under way. As mentioned in previous Observer updates, the other items to be completed after successful PCB remediation include reinstalling bookshelves and ceiling conduits, refurnishing the auditorium and the historical room, and improving the ladies room.

Following an administrative delay involving approval of the specific coatings to be used for encapsulating, the painting had begun on January 2. It was expected to be completed within that month. Then the heating system, which had been replaced by external heaters during the mitigation work to keep contaminated dust out of the air ducts, was to be turned back on. After at least two more days, the air quality will be tested. The tests take only a few days, but there will be a longer period of anxious waiting for the results.

Town Attorney Derek Donnelly warned that the federal government shut-down had closed the Environmental Protection Administration, which may add an unpredictable delay. Let’s hope not.