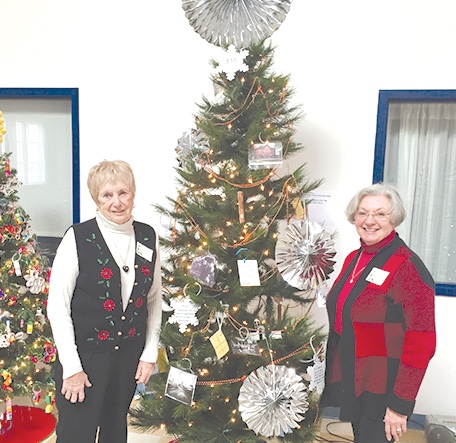 For their Holiday Tree Gala, the Suffield Garden Club collected a great variety of trees from imaginative designers and stood them up for the first two weeks of December at the Senior Center for all to see. And, hopefully, to buy. From this first-of-its-kind-in-town affair, the trees were offered for sale, with the proceeds supporting the SGC’s scholarship program.

On Saturday, December 1, a good crowd admired the trees as the Suffield Middle School Elite Voices sang. The Suffield High School Chamber Ensemble entertained on the next afternoon. For a carol sing on December 9, a group of citizens gathered to sing among the trees.

The Holiday Trees, arrayed in the big room, the dining room, and the multi-purpose room at the Senior Center, were indeed diverse, ranging in size from two to eight feet and including several “pencil trees,” tall and very narrow. All, understandably, were artificial; all were illuminated, mostly in white.

Their decorative styles varied from quite standard to uniquely donor-specific; they came from many segments of our community: church groups, realtors, Town departments, school classes, youth groups, and more, along with a number of individuals. The Second Chance Shop provided a big “tree” in the form of a snowman. McAlister School offered a tree decorated with quilling, a traditional craft involving coiled paper strips. FOFAH’s tree was decorated with birds, topped with an eagle. The Public Works Department’s was assembled from water hose segments and couplings. The Garden Club’s featured Noah’s Ark and the animals. There was much more, including one Hanukkah Tree. That one was removed after the first day, as it was needed elsewhere for the first night of Hanukkah on December 2.

Anita Wardell, Tree Gala co-chair along with Judy Edwards, reported that 31 of the 50 trees provided were sold, raising $1,678, which will be a big help in support of the scholarship program.