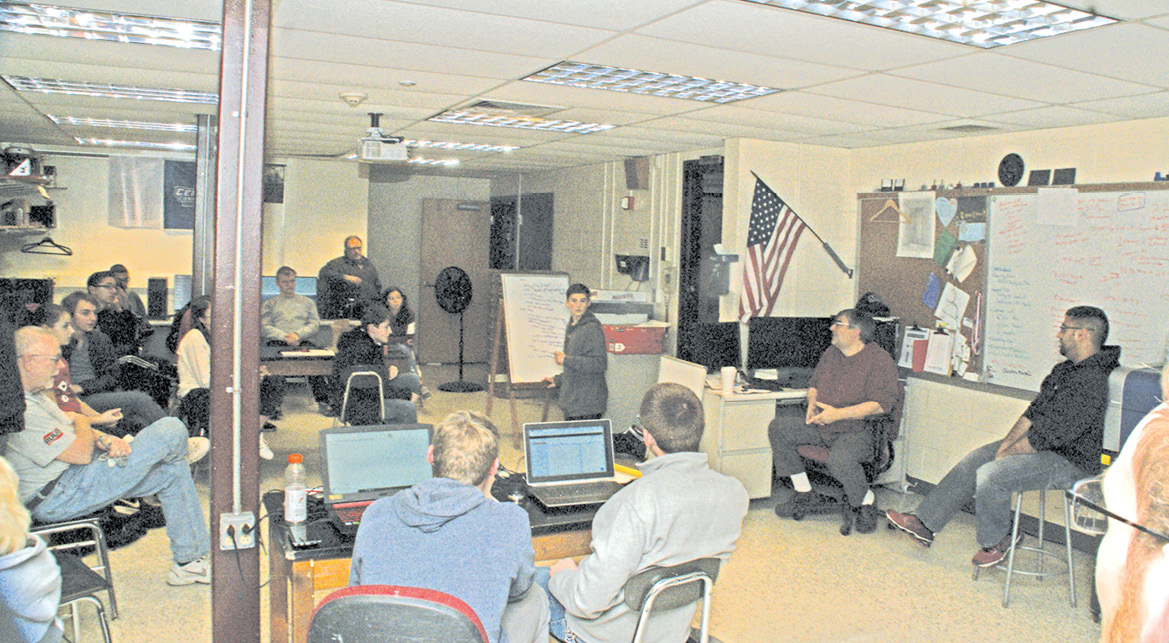 The Aces High FIRST Robotics team holds an important planning session one day after the details of this year’s competition were announced in early January. In a classroom next to the WLHS metal shop, mentor Frank Devito, under the flag, leads the discussion and a student member lists key topics on an easel pad.

On January 6 the students and mentors of Team 176 gathered in the computer room next to the metal shop at Windsor Locks High School. They studied the nature of the new game, called Destination Deep Space, identifying the capabilities their robot must have. They discussed ways to provide those capabilities and considered possible game play strategies that might be advantageous. Then they broke into groups to begin work on designing the mechanics of the robot, planning its manufacture, programming the controls, and even making mock-ups of playing field elements to practice with.

Destination Deep Space was developed by the Boeing Company. It’s a complicated game based on loading cargo into rocket ships in a remote environment troubled by sand storms. The cargo is represented by rubber balls somewhat bigger than a basketball. As usual, the adversaries in a match consist of two three-team alliances, each providing three mobile robots. Each alliance works to load its two rocket ships standing vertically and one horizontal cargo ship, all with several cargo bays whose hatch covers must be attached to secure the cargo.

Points are earned for the cargo loaded and secured, as well as for ending a two-and-a-half-minute match with robots on several platforms of various heights. In the first 15 seconds of each match, robot operators can’t see the field because of the sandstorm — curtains are lowered to block their view — and the robot operates by preprogramming, by driver control using television from the robot, or by fully autonomous control. The stationary field equipment has a number of vision targets that robots can sense to guide their action.

So with six robots milling about on the 54- by 27-ft. field and a lot to achieve in each match, Destination Deep Space should be a challenge to play and interesting to watch.

The team has already booked two qualifying events: March 8-10 at Wilby High School in Waterbury and March 22-24 at Western New England University in Springfield. With good results, the next event would be the New England District Championship April 10-13 at Worcester Polytechnic Institute. And then on to the Global championship?

This year Aces High is grateful for having received a Zak Grant that will help pay some of the considerable expense of participating in FIRST.