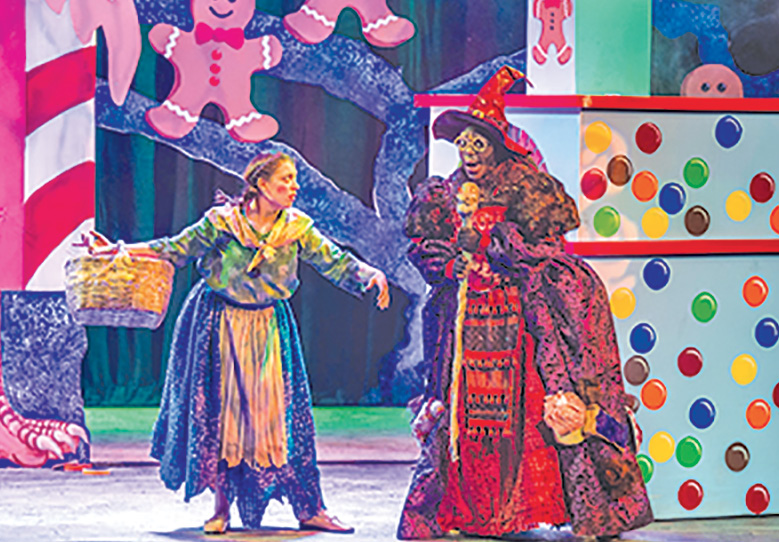 Singing as Gretel, Brynn Scozzari duels vocally with the witch in the opera Hanzel and Gretel.

If what Scottish philosopher Thomas Carlyle said is true that, “Music is well said to be the speech of angels”, then Suffield native/ coloratura soprano Brynn Scozzari is talking in good company. Brynn, a 2007 SHS graduate, attended Roanoke College in Virginia, took voice lessons and majored in vocal performance, graduating with a BFA in music and voice. Shortly after, she was accepted into the recently formed apprentice program at Opera Roanoke, a regional opera company where she had the opportunity to work with professional guest artists, sing in main stage productions, perform in outreach programs, and learn about stage managing, choreography, and opera production. She made her opera debut singing in the chorus of the Flying Dutchman and followed it up with chorus parts in the Pirates of Penzance, The Magic Flute, and Julius Caesar. She made her solo debut singing in The Masques of Orpheus.

Brynn said that she knew by sixth grade that she wanted to have a career in music. A veteran of childhood dance classes, music classes, and children’s theater productions, she loved the creative arts. It didn’t hurt that she grew up in a musical family that could give the Partridges a run for their money.

Her father, Sam, and brother, Dane, both play drums/percussion; her mother, Lois, plays the piano, violin, and viola; and her sister, Taryn, plays the saxophone. Brynn can play the flute and trombone, but these days, her instrument of choice is her voice. And, while most people don’t think of singers as athletes, Brynn states that there are several parallels. Like an athlete, singers must practice several hours a day to become proficient at their craft, and they both must exercise muscles pertinent to their sport. In singing, the larynx is the muscle to be exercised if it is to get and stay strong. Brynn, who has understudied in operas several times in the past three–four years, practices up to five hours a day but never sings more than three hours since that can result in overuse and damage the larynx. Since most operas are sung in either French, Italian, German or English, she practices foreign language diction for one hour per day. She adds that it is one thing to speak a foreign language and another to speak it with the proper diction and she “thanks her lucky stars” that she had Carl Casinghino for high school French crediting him with her ability to speak properly. That, a college minor in French, and time spent student teaching in Monaco, helped her master French.

Brynn is a coloratura soprano, which is the soprano who sings the highest notes. She explains that opera voices are classified by the German Fach system which divides voices into six main categories according to range (the notes your body can produce), weight (light, bright and agile or heavy, dark, and powerful) and color (unique voice quality and texture) with sub categories in each one. With this system prospective opera singers know which roles are best suited to their voice.

Determined to make music her career, Brynn furthered her music education at Southern Illinois University, obtaining a Master’s degree in Opera/Musical Theater while teaching voice and music appreciation to undergraduates. She currently teaches bel canto voice and a class of “singing for the stage” to musical theater students at Radford University as well as teaching voice to private students and auditioning for operatic parts.

While singing is her first love, her directorial debut came in 2017, when she directed Tosca for Opera Roanoke. She really enjoyed directing which is a “collaborative effort” between the set designer, the choreographer, and the director. She likes that, “With directing, there are no creative limits so you can really think outside the box”. It appears that Brynn did just that since, in the words of one reviewer, “Scozzari guided the cast in a staging at once faithful and inventive direction that persuades us with its insights.”

Given the nature of the business, Brynn has a busy life. While her college teaching and voice lessons anchor her, she has at times also directed stage plays for children’s theaters, taught dance, performed in dinner theaters, musically directed performances, and stage managed. All this interspersed with auditioning for operatic parts and of course those daily practice sessions to master her craft. And while she loves performing, her ultimate dream job would be with a regional theater engaged in outreach and education so that she could share her love of the arts with others. 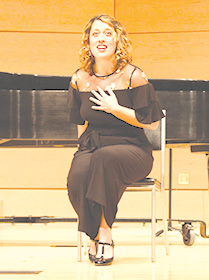 Brynn sings in a recital at the Covington Performing Arts Center, near Atlanta.