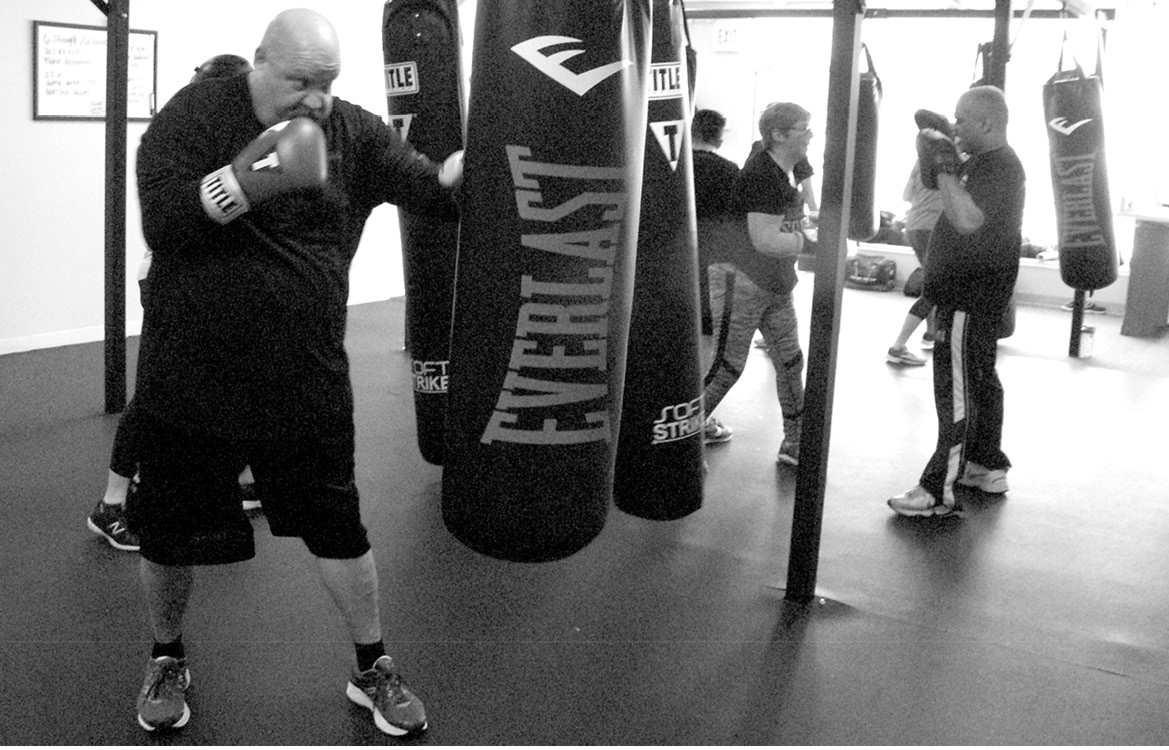 Hits & Kicks, a Suffield physical fitness studio that specializes in boxing and kick-boxing, has moved to a new, more visible, location in the old CVS plaza between Zantos and Hair Unlimited. The vigorous training is provided by skilled instructors in scheduled, unisex classes.

In two early morning visits, this reporter observed widely different activities: One session, called Pound, had the students following a leader in rhythmic full-body motions paced by music, including pairs of short batons tapped on the floor or clacked together along with the beat. On another morning the training was boxing – whacking vigorously on long, heavy punching bags dangling from a steel framework, – and sometimes kickboxing the bag as well, all to the shouted instructions and encouragement of the trainer. The boxing sessions were alternated with periods of high intensity interval training, like fast pushups and sit-ups but more complicated, again all to the demanding commands of the trainer.

Boxing trainer Israel Pito Cardona of Newington commented that he had held the International Boxing Organization junior lightweight boxing championship in 1995 as well as championships in two adult leagues. He volunteered that his lifetime record was 36 victories, 10 defeats, and 28 knockouts. His commands to the class in Suffield were impressively authoritarian. Pito had brought a friend with him that morning, Geoffrey Hansen, who had once been Golden Gloves Elite Champion and now works at Pratt & Whitney Aircraft. David set a fine example for the six women and one man he was exercising with.

Hits & Kicks proprietor Donna Calabrese, who had previously been employed in office machine marketing and had earned her black belt in Brazilian Jiu Jitsu when she was younger, decided to open a fitness studio in 2016. She started in Suffield in the Glynn Building on High Street, with her studio’s entrance off Mountain Road, but moved to the more visible location this year. At present, in addition boxing and kickboxing, her classes include Pound, TRX (working out with suspended straps), and PIYO (a mix of Pilates and Yoga). Classes are scheduled in the early morning and the evening. Donna said she plans to add a program of self-defense training starting in March. Keep posted. The studio’s phone number is 860-729-8614.