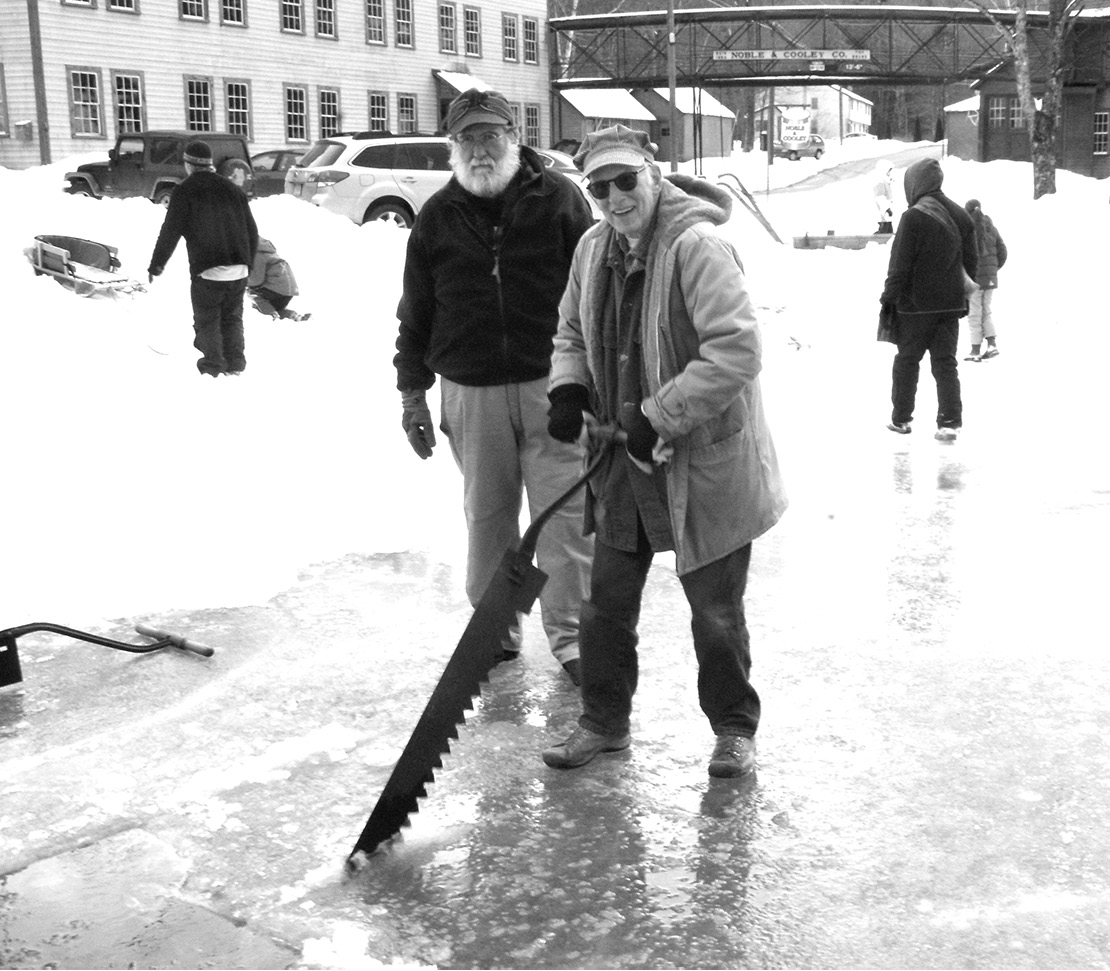 Each year, when the weather permits, Dennis Picard holds a public demonstration of ice harvesting at the Noble & Cooley mill pond in Granville, just north of North Granby. This year the weather on February 2 was great, the ice was clear and over a foot thick, and appreciative visitors enjoyed the demonstration and explanations by Picard, a knowledgeable historian and former director of the Storrowton Village Museum at the Big E.

Many onlookers each year accept the invitation to take hold of one of Picard’s ice saws and learn how to cut the long slices of ice which can then be split into chunks, floated off, and lifted out with big iron tongs. This year one of the students was this writer, who brought an old Connecticut ice saw recently donated to the King House Museum by Eric Haffner.

The saw was very similar to the ones that Picard brought, and he said that type of saw was manufactured from 1819 to 1919. He dated the one I brought to about 1880 and called it a nice example because it retained the original pin and wedge that secure the blade to the handle. I accepted the offer to take a block of ice back to Suffield, and a helper lifted the heavy cube into my car. But at the King House Museum, all I could manage without tongs was to roll it out over the tailgate threshold. Despite unusually warm weather, it melted slowly in the parking lot for over a week.

Harvesting ice for year-round use was an important part of New England life until the spread of mechanical refrigeration a century ago, and many farms had their own well-insulated ice houses. There were several giant ice houses on the western shores of Lake Congamond, whose ice kept refrigerated freight cars cold for all the East Coast railroads.

There were at least two commercial ice businesses in Suffield: Brome’s and Cain’s. Brome’s Pond is now part of a Suffield Land Conservancy property near the south end of Mapleton Avenue. Cain’s Pond was created by a dam on Stony Brook along the southwest border of Stony Brooke (sic) Park; that pond disappeared when the dam failed not long ago.

The yearly ice harvest program is presented by the Noble & Cooley Center for Historical Preservation with support from the Suffield Historical Society, the Suffield Land Conservancy, and the Granville Cultural Council.

Next Article
Food For Thought
“Man cannot live by bread alone; he must have peanut butter.” –…