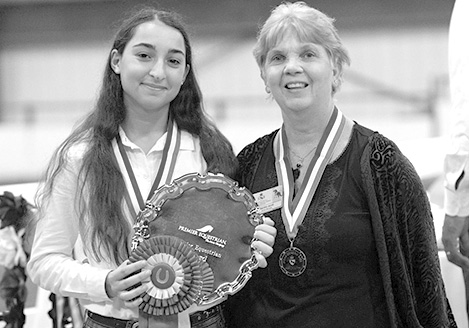 Gabriella Santanielo, left, was photographed in October when she won the Premier Equestrian Award at the International Friesian Show Horse Association 2018 World Show. With her in the photo is Sandra Jacobs, president of IFSHA.

“I’m very proud of Gabriella and her horse. This is such a prestigious show and it’s an honor to qualify, much less to attend with your own horse and achieve so much together,” said trainer Danielle Barrasso, referring to her student, Gabriella Santaniello, a junior at Suffield High School who added the Premier Equestrian Award to her list of achievements at the 2018 International Friesian Show Horse Association World Show, October 2-7, in Springfield, Ohio.  Trainer Barrasso worked with Gabriella at the Sunny Hill Farm on North Street.

“She started riding at age five, and became my student when she was seven. She started out doing hunter/jumpers on my ponies before her parents bought Raja and waited for her to grow into her new horse.”

The wait, this Premier Equestrian Award winner has certainly proven, has been worth it. “She’s accomplished quite a bit. She loves dressage and wants to earn her medals. She’s just one Third Level score away from her Bronze,” said Barrasso, an acclaimed trainer in western Massachusetts who was selected by U.S. Equestrian Foundation in 2011 as an Equestrian of Honor and awarded its Vaughn Smith Trophy.