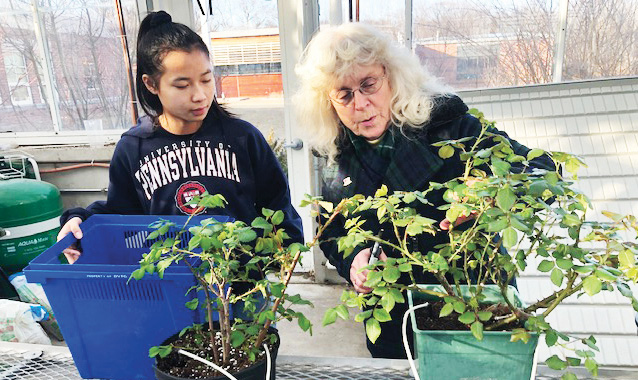 SHS Agriscience student Moo Ket Po assists as skilled rosarian Marci Martin carefully prunes one of the 65 rose plants in the SHS greenhouse that were being forced to blossom this winter for the February garden show in Hartford.

Remember the Observer’s past story about turf being greened in February in one of Goodyear Nursery’s greenhouses? The turf was used in the annual Flower & Garden Show at the Connecticut Convention Center. This year a new crop has been added. Sixty-five rose plants were forced to blossom beautifully in the Suffield High School Agriscience greenhouse for the February 21-24 show. This was not only a convenience for a Suffield resident but a good educational opportunity for the Agriscience students.

Master Consulting Rosarian Marci Martin, who moved to Suffield last spring, supervised the operation at SHS. She knows the business well, as she served multiple terms as president of the Connecticut Rose Society and was formerly the rosarian of the renowned rose gardens at Elizabeth Park in West Hartford, with 15,000 plants. Happy to share her knowledge, she is scheduled to be the speaker at the April meeting of the Suffield Garden Club, telling the history of Elizabeth Park.

The roses for the Convention Center came from commercial suppliers and, after a required period of winter dormancy in Martin’s barn on South Main Street, were brought to the greenhouse on December 17 after the poinsettias were gone. They were fertilized, kept moist with warm water, and helped with grow-lights on cloudy days. In this cooperative effort, Rosarian Martin and the project helped the students learn useful information about commercial horticulture.

Laura LaFlamme, director of the Suffield Agriscience School, said the school had arranged to transport the roses to the Convention Center safely strapped in a school bus. This year, both turf and bloom at the big show spent the winter in Suffield.

Next Article
SMS Drama Club
Suffield Middle School will be transforming into a “school of hard knocks”,…