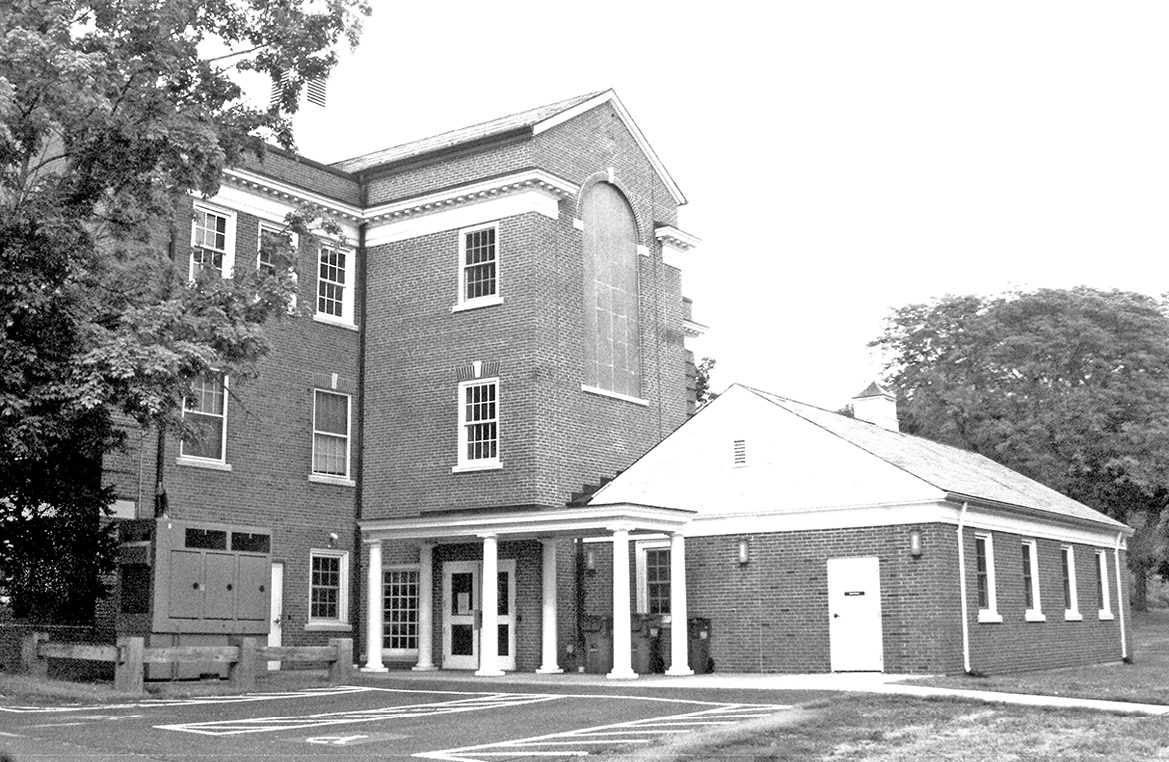 This view of the Suffield Town Hall (from last July) shows the only part of the building that would appear different after the proposed major renovation project is complete. As presently conceived, the new, expanded records vault would protrude from the south side of the present meeting room. In a historical note, the tall wing with the rear-facing decorative slate panel was added in 2001 to the original 1963 building to house an entrance lobby, two bathrooms, and an elevator. The one-story meeting room was originally the Police Department garage.

It’s been a long, hard-working endeavor to find a workable plan for the needed Town Hall improvements, but First Selectman Melissa Mack is leading the effort to proceed with the only plan she now feels is appropriate to pursue. A Request for Proposals (RFP) based on this plan was being carefully edited at press time and was expected to be published by the end of February.

The present chapter in Town Hall history passed a key point on October 8, 2015. By then, appraisals of the precarious condition of aging Town Hall infrastructure, along with space needs studies, had coalesced into a plan for renovations and improvements to the building, including a state-required expansion of the Town Clerk’s records vault. On October 8, 2015 at Suffield Middle School 2,247 voters — an extraordinary turnout — voted, by 65 percent, to approve a proposed bonded appropriation of $5.13 million for the Town Hall project.

Since then, a number of concepts for the Town Hall have been studied, some of which, involving significant expansion of the old building and two concepts for entirely new buildings, cost as much as double the approved amount. So the present plan calls for the original renovations and modest expansion for the vault.

The proposed project includes significant interior changes as well as the infrastructure renovation. Some walls are to be moved to accommodate a tentative layout plan with two areas laid out on a shared use basis, the Tax Department sharing with the Assessor on the first floor and the Building Inspector sharing with Planning & Zoning in the lower level. Importantly, the tentative plans call for a large hearing and meeting room in the entire west end of the first floor. The Town Clerk is shown on the lower level in part of the present meeting room, with a new vault protruding south toward the parking lot. Handicapped accessibility is assumed, and up-to-date emergency egress requirements will be met. The plans are conceptual, not locked in place.

The project would be contracted on a construction-manager-at-risk basis, in which the customer’s requirements are spelled out in detail, and the contractor promises to deliver the work at the contract price, with no escalation for unexpected costs. For such a contract, the RFP must be especially detailed and specific. The present RFP is based, for its “boiler plate” standard clauses and general format, on the RFP prepared for the proposed Bridge Street Community Center, which reportedly took nine months to write. (Bonding for that project was among the three proposals approved at the October 2015 meeting. But that’s another story,)

The Town Hall RFP is being issued in two parts, one for the architectural plans, and the other for the construction itself.