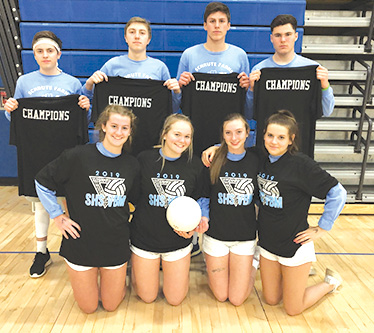 Photo by provided by the author

Suffield High School held its annual Volleyball Marathon again this year from Friday, March 22 at 7 p.m. until Saturday, March 23. at 6 a.m. Organized by Suffield High’s chapter of the National Honor Society, students enjoyed competing against their classmates in volleyball during one of the school’s most popular traditions. Money raised from the event goes toward scholarships that the National Honor Society awards to deserving seniors (who may or not be a part of the Society).

With 28 participating co-ed teams composed of eight to ten members, close to 300 students entered the Commons wearing their team shirts and carrying snacks, games, blankets, pillows and other possessions for the long night. NHS members, along with dozens of volunteer chaperones, teachers and administrators helped to ensure the night went smoothly.

This year, students and staff members were able to enjoy a few new additions to the fun-filled night. A team of eight SHS teachers was added to play against four student teams

The tournament started at 8:40 p.m., with four games being played simultaneously, and continued until six the next morning. With seven teams in each of the four divisions (Air, Earth, Fire and Water) each team played six opening round games. The top four teams from each division advanced to the playoffs. When not competing, students relaxed in designated areas in the Commons, playing games, listening to music, chatting, or simply trying to rest before their next game.

After a short break for breakfast, the top 16 teams advanced to the playoffs. The tournament ended with the championship game, in which team “Schrute Farms” earned the 2019 title.