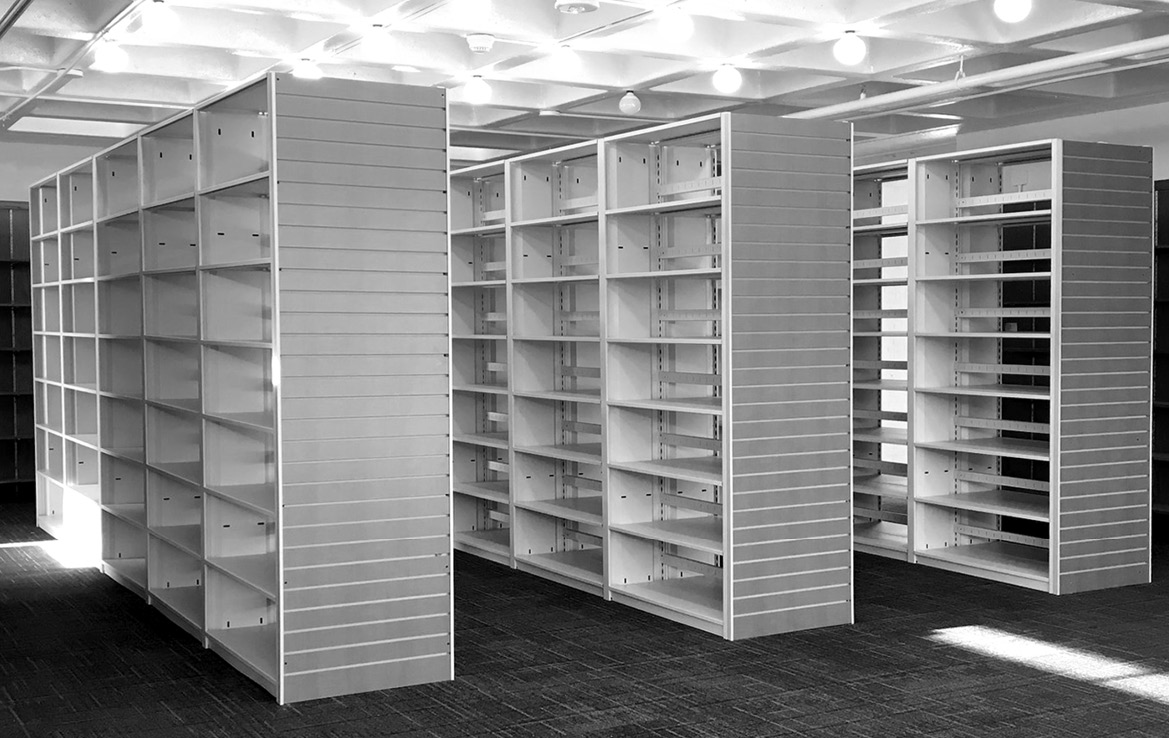 On its new, black carpet, the mid–level library room adjacent to the south ramp now sports three banks of what were described as the same free-standing shelf units that were there before, but fewer of them. Space left in the foreground, next to the ramp, will accommodate the big, granite-topped “board-room” table, for which there is no longer space in the historical room.

First Selectman Melissa Mack announces in her update on Page 3 of this issue that the Kent Memorial Library will open to the public in June.  That is great news, and this reporter’s words may have become superfluous, but some details may be of interest.

One day in early April the town’s temporary library on Ffyler Place was shut down for an hour and a half in mid-day, and the library staff all got a chance to examine the interior of the “big house,” in which many of the last tasks of its renovation and remediation  had been completed. The general feeling of the staff was one of enthusiastic optimism, for the light at the end of the tunnel had become quite bright.

At the time of the staff’s tour, the new (black) carpeting had been laid in the upper levels, and almost all of the shelves had been installed, including a reduced amount of free-standing shelves in the non-fiction room (mid–way up the ramp on the south side). The newly renovated restrooms were approaching completion.

Fifty-four new seats were ready to be installed in the auditorium (replacing 70), and the new “compact” shelving was already installed in the historical room. With only a few details remaining, it seemed likely that before this issue of the Observer had been distributed, the staff would be busy in their old home making the place a working library again.

Thousands of books must be unboxed at the “big house.” Others will be returned from commercial storage, from the temporary library on Ffyler Place, and from a few households that responded to the request that they be held for long loans, not realizing that “long” would end up being over four years. Certain essential books and papers in the historical collection were kept available at the East Granby library historical room and in the archives of the King House Museum.

Putting all the books in their new proper places on the shelves would be a daunting job, and almost certainly, many shelves would have to be repositioned to provide the necessary spacing.

In the Permanent Building Commission meetings, it has seemed clear that opening to the public will require some sort of approval from the Boston District of the EPA and the Connecticut DEEP. This was discussed in the Commission’s March 21 non-meeting.  (Lacking a four-member quorum, the meeting was adjourned in five minutes, but the chairman and two members continued an informal discussion for an hour.)

Chairman Joe Sangiovanni explained that the EPA doesn’t have to rule that the library is satisfactorily free from PCBs. When they receive the final report from the recent tests, the EPA simply needs to be satisfied that the test program they had approved early in the remediation process had been performed, with satisfactory results. At their April 4 meeting, the PBC was told that Fuss & O’Neill, the Town’s environmental consultant, had not yet completed that report. (It was a preliminary report that had given the Town the confidence that the final stage of library completion should commence.)

Next Article
Twenty Farming Seasons
Two decades of farming has provided the local farmers with many challenges.…