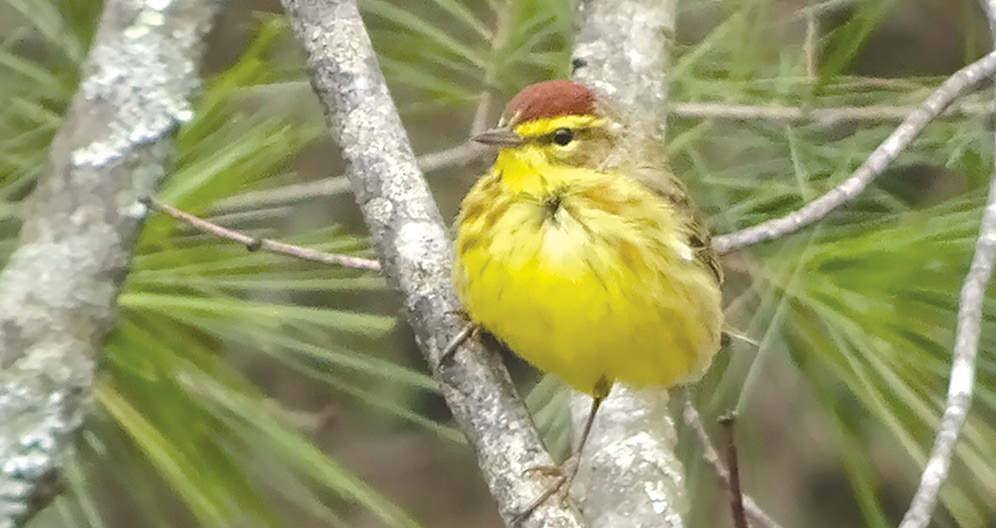 Grab your binoculars to catch a glimpse of a Palm Warbler as they pass through town this month heading north to breed. This one is called an Eastern Yellow Palm Warbler.

When my brothers and I were growing up, my parents were not on orange alert about strangers. While my friends were all being lectured about the dangers of unknown people in their lives, my parents were throwing caution to the wind. In fact, their eyes would light up whenever we encountered an interloper in our travels. My dad would roll down the window in the rental car and offer the unsuspecting hitchhiker way more than a ride. The stranger would be given the opportunity to “show the kids around the area” and to earn 10 dollars while doing so. We would all pile out of the banged up rental on the side of the road, and mom and dad would race off, newly energized, temporarily free of the ball and chain, and agreeing to see us all before the sun went down. We did learn a lot on these sabbaticals from our parents, and I continue to have a soft spot in my heart for strangers. Even today, there is something so freeing about spending time with those who know none of our back story. Words do not need to be measured, and humans can be at their best in the company of someone new.

These days in the thickets and fencerows around town diminutive strangers, the warblers, have arrived. They are a group of small birds sporting a variety of colors. In constant motion, the warblers flit about in the trees and shrubs looking for insects. Often these feathered visitors are just passing through, traveling from their exotic tropical winter feeding grounds heading north to breed. And even those who remain in our area for the season are elusive. Soon the trees will be leafed out making it a challenge to catch a glimpse of most warblers. There are 113 species of warblers living in North and South America sometimes traveling between the two continents. They bear names that describe them…yellow rumped, hooded, black and white, chestnut sided. Some are named for locations they may or may not like to peruse: Cape May, Tennessee, and even the Connecticut warbler. I wish I could say that the Connecticut warbler is a show stopper, but sadly he is drab. And then there are those who are holdouts with more cryptic names better suited for the Scrabble board such as the prothonotary warbler.

One of my favorites is the palm warbler with his handsome eye stripe and jaunty rust colored beret. Unlike many of his warbler friends, he prefers to forage and nest on the ground. He bobs his tail as he searches for insects. Sometimes he perches in a tree and sings to establish his territory. When he has locked eyes with a female, they build a small nest lined with moss and grasses on the ground, and she lays 4-5 eggs which are white with lavender spots. If all goes right, they hatch and fledge after a few weeks filling their small bellies with mosquitoes and beetles. Once the palm warbler has raised his brood, he joins up with a mixed species of birds, and I’d like to think that he is embracing all the idiosyncrasies of strangers in this mixed flock. He is all about inclusion, not about building walls. So keep your eyes peeled this spring for an outsider or two in your neck of the woods. Don’t let them pass by unnoticed. If you need some extra incentive, remember Yo Yo Ma’s words “Good things happen when you meet strangers.” And mornings spent with strangers, feathered or not, seem like a pretty good way to start the day.

Next Article
May Bird Migration Has Begun!
Each spring, thousands of birds make their annual trek north from their…