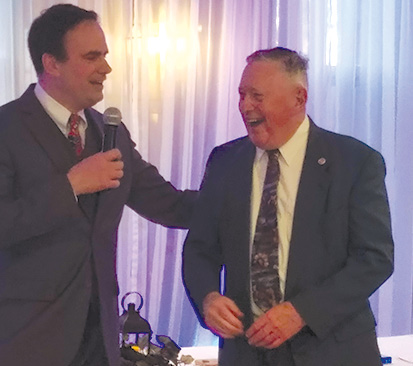 Chief Art Groux (left) shares some memories with Jack Muska before honoring him with the Association’s Lifetime Achievement Award.

The Suffield Volunteer Ambulance Association (SVAA) held its annual Volunteer Recognition Dinner on April 6 at Crestview Country Club. Organized by a committee comprising Kathy Dunai, Joan Perrone, Ashley Godin, Kirstin Carr, and me, the event is held to honor the many volunteers, both from in–town and nearby towns, who volunteer to serve the community. While all the volunteers deserve recognition, the dinner ceremony offers special recognition to individuals whose efforts stood out in whatever role they played.

The ceremonies opened with bestowing a Lifetime Achievement Award, given to a member who has shown tireless desire to go above and beyond on a regular basis. It is considered the highest level given by the SVAA, given only in those years when an individual clearly deserves this special honor. That was clearly the case this year, when the award was given to Jack Muska. In addition to a myriad of other civic and charitable duties in town, Jack has volunteered with the SVAA for 22 years. He spent many years as an EMT driver, answering calls, and still serves the organization as a member of its Board of Directors.

The Chris Schmeck award is given to honor an individual who has consistently demonstrated performance to enhance the SVAA. This year’s recipient was Don Miner, who has volunteered for the SVAA for 29 years. This year alone he’s spent 1348 hours as a volunteer provider and continues to serve on the Board of Directors. The Perrault Award is issued to a person who stands out in the organization as a leader and/or person of exceptional service during the past year. The award was given to Kirstin Carr.

Jacob Audet and Jackie Guzie were honored with the Zak award. That award, in honor of Amiel Zak, is given to a member or members of the SVAA organization who demonstrate commitment and service to the community. The 2019 Hero Award went to Jennifer Devine, Jennifer and Karen Giordado, who report regularly every week to perform the mundane but crucial tasks of taking inventory and cleaning the trucks.

And of course, it must be noted that, this year alone, Victor Mathieu volunteered 1795 hours, and Bill Borchers and Sonny Osowiecki each completed a remarkable 36 years of service to the SVAA. We owe all these people, and those not specifically mentioned, a thank you for their service to our community.

Next Article
Brooks’ New Home
Brooks, abandoned in Stony Brooke Park in February, has made a full…