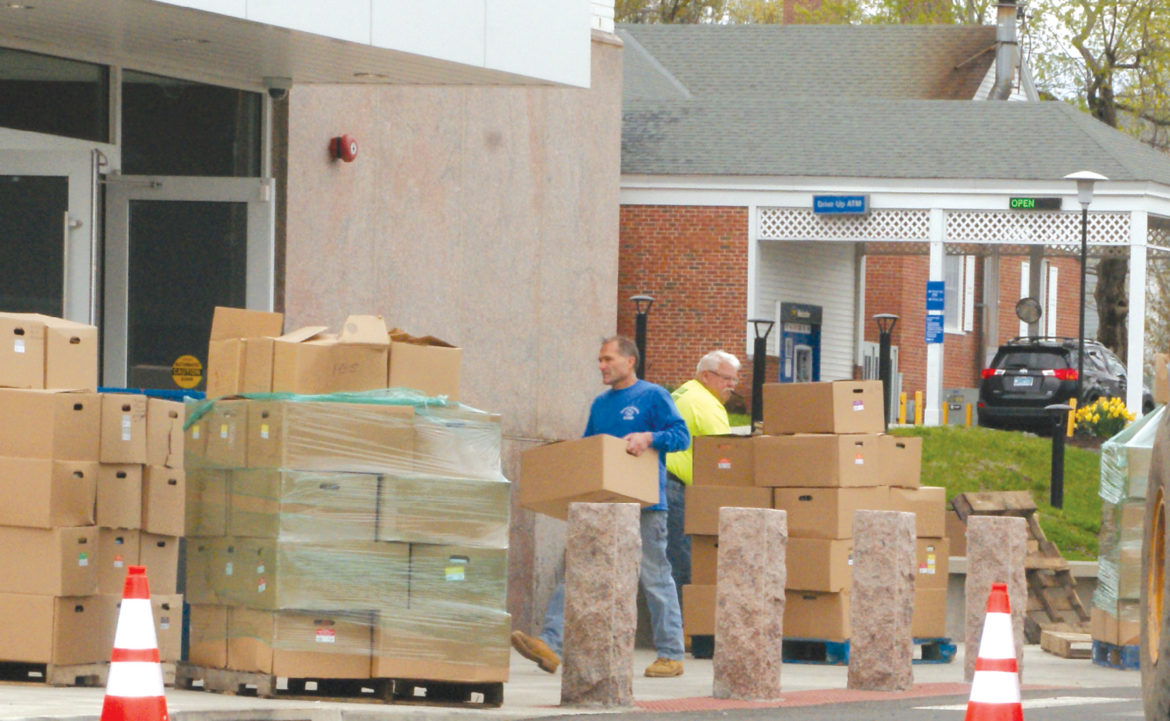 Highway Foreman Mark Cervione, center, and Assistant Foreman J. R. Richardson move cartons of books to be taken into the Kent Memorial Library by two of the low-security State prisoners who often help with Town tasks. During the library’s addition, renovation, and remediation project, these books had been stored in a truck trailer parked at the highway garage.

On April 23, immediately after the Observer’s May issue went to press, First Selectman Melissa Mack announced that the Kent Memorial Library would reopen on Saturday, June 29. There were still a number of tasks to complete, but it looked as if the June 29 date would work, including word from principal donor Michael Zak that he could be present. Many library aficionados looked forward to the end of their long wait. At press time for this June issue, nothing has caused a change in that schedule.

On Saturday April 27, books that had been stored in big cases in a box trailer at the highway garage and in a storage pod next to the temporary library were brought to Bank Lane and unloaded, in a welcome respite in the spring rains. The books were taken by elevator to the main floor and deposited in the café and fiction areas and in the corridor leading to the new entrance building.

Work on unpacking and reshelving had not begun by mid-May, but by then, library staff had been scoping out the project ahead, and a small crew of volunteer painters from the Friends of the Library had already finished painting the children’s room play house. (The pea green color was specified by Selectman Mack with advice from the Historic District Commission.)

The final report on the environmental remediation project, prepared by consultant Fuss & O’Neill, went off to the EPA on about April 26, later than planned, but not expected to be a deterrent to the scheduled opening. Samples in the first of a quarterly series of regular environmental tests were taken on May 6. This significant expense is expected to continue indefinitely – a permanent reminder of Suffield’s unfortunate adventure with PCB. With satisfactory results – and the opposite seems unthinkable – the librarians were to begin unpacking and reshelving, perhaps by May 16. Library Director Jackie Hemond was planning a symbolic “bucket brigade” from Ffyler Place to Bank Lane on June 29.

This reporter was pleased to be treated to a brief walk-though in the library on May 10. There seemed to be no remaining construction tasks that couldn’t be completed in time for the planned reopening. As the Observer’s readers can expect to see for themselves in a few weeks, no further comment is offered here.

Next Article
Proposed Budget Passes
On May 8, Suffield residents approved a $59.3 million Town budget, which…