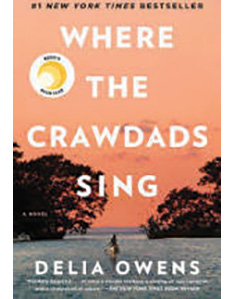 I had heard so many “rave reviews” about this book, I thought I might be disappointed when I finally got to read it, but I was definitely not.

It started out about a family who lived in the marshes on the Carolina Coast. The father was abusive and the mother just walked away one day and finally all the brothers and sisters left leaving the youngest, Kya, who was around five, alone with her father. Surprisingly, she and her father got along. They fished together in his boat and basically lived off the land as they had always done. But then he left her and she was completely alone.

Another reader commented to me that such a young girl could not possibly have survived by herself, but she had been surviving all her life. She continued to fish and sell the fish to Jumpin who, with his wife, watched out for her. With the small amount of money she earned from her fishing she was able to buy the few things she needed in the nearby small town. Other than that, she lived in the marsh in their ramshackle “house” with no electricity or running water and became known as the “Marsh Girl”. The marsh was where she loved to be and she continued to learn so much about it. It just touched her soul.

Eventually she met Tate when they were both out fishing, a kind boy of about her age, who became her friend and he taught her how to read. The authorities had tried to get her to school but she had avoided them and they eventually gave up on her.

The rest of the book follows her as she grew up and became an expert on everything about the marsh, the flora and fauna and every way to get around in it. It is a gripping story and the marsh more or less stayed in my mind after I finished her story. It was such a wonderful book in so many ways.

This is a true story about the author’s 15-year friendship with a very strange person. At the beginning, the author, Walter Kirn, is living on his farm in Montana. His wife is president of the local Humane Society, and as a favor to her he has agreed to help transport an injured dog to a man who has offered, on the internet, to adopt it. This man is Clark Rockefeller and he lives in New York. When he meets Clark, the author is overwhelmed by his suave and fascinating personality. His relationship with Clark will continue this way for a long time. There are many times when they meet and Kirn agrees to do whatever Clark suggests. There are times when he does wonder about his friend and the stories he tells, but not often.

It turns out that this man is not one of the Rockefellers. He was an immigrant from Germany and his real name was Christian Karl Gerhartstreiter. Actually, he had used many aliases. A recent one was Christopher Chichester, who claimed to be a British aristocrat. The appalling history of this man is made public in 2013 when he goes on trial for murder in California. The author attends the trial and writes about it vividly.

This book is described as “a memoir of being duped by a real-life Mr. Ripley, and an investigation into the crimes of a true psychopath.” That says it all! I might add that it is horrifying to read about a man like the one in this book, but it is impossible to put the book down.