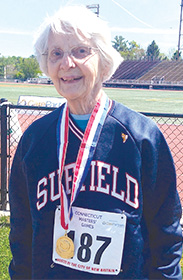 Veteran competitor Sarah Seger is pictured after winning the 1500-meter race walk in her age category at the Connecticut Masters’ Games in New Britain on May 18.

Three West Suffield competitors had perfect weather on May 18 for the Connecticut Masters’ Games Track and Field Meet at Veterans Stadium (Willowbrook Park) in New Britain.

Sarah Seger competed in the 1500-meter race walk with a time of 17:55. Because she was the only 90+ female competitor, she finished first in her age division. Her next oldest competitor was age 67.

Martha Oppenheimer (female 75-79) competed in four events. She placed first for her division in the long jump with 1.62m and placed second in triple jump, shot put and discus throw.

Alan Popp finished second in his division (male 70-74) in the 50-meter dash and 100-meter dash with times of 9.43 seconds and 18.55 seconds, respectively. Both results were an improvement over last year’s times.

Competitors from Maine to Florida – 12 states in all – gathered to compete in the meet. Sarah was the most senior competitor.