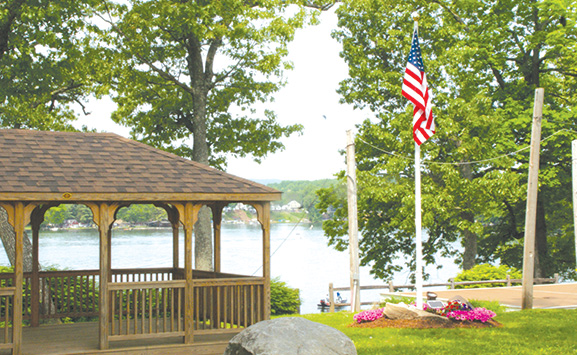 The new flagpole at Babb’s Beach near the performance platform adds color to this quiet scene the morning after a plaque honoring Nelson Babb and the Babb family was dedicated.

About 30 people gathered by the performance platform at Babb’s Beach on May 31 for the grateful celebration honoring Nelson Babb and his family. They also celebrated the new flagpole installed by Citizens Restoring Congamond (CRC). Nelson Babb’s oldest daughter, Claudia Babb Reich, traveled up from North Carolina for the occasion.

The group admired the small, colorful garden surrounding the flagpole and viewed the two bronze plaques CRC had installed on boulders in the garden.

“In Memory and Honor
Of
Nelson Babb Jr.
and Babb Family”

(Both plaques are rendered here as they appear.)

Ginnie Graves, chair of the CRC committee that managed the project, welcomed the guests and asked committee member Deb Herath to describe how the project came to be. The National Register listing, achieved 13 years ago by a joint CRC/Town effort, had never been recognized with a plaque, and the committee felt that Nelson Babb and the Babb family deserved permanent credit for their role in creating and developing the site. The flag pole seemed an appropriate addition. Committee member Linda Champagney and CRC president emeritus Gerry Crane also spoke.

First Selectman Melissa Mack recounted the Babb’s story and the progress the Town had made in bringing the beach back into use. She was delighted with the flagpole and the plaques that CRC had provided.

A recent improvement by the Town is the new stone stairway down to the beach from next to the performance platform. The stairs were completed by the end of May, and the handrail installation had begun by then. Parks and Rec Director Peter LeClerc advised that the railings would be completed in early June. The beach was scheduled to open on June 22.

One appreciative attendee at the dedication ceremony was Henriette Trapanese, 98, who came over from Enfield with fond memories of Sunday afternoons during her childhood in the 1930s when her family visited Babb’s regularly for a picnic party. She recalled the picnic spots, with fireplaces and tables and many trees. Hers was a quieter memory, but many others recall roller skating in the dance hall. Nelson Babb added a new floor in 1954 to improve the skating. He turned ownership over to the Town in 1977, but continued as operator, though with declining patronage, until he closed the business in 1997.

Considerable restoration of the rink was accomplished by CRC following the 20-year lease they were given by the Town in 2003. In 2016 the Town stepped in with a program motivated by First Selectman Mack concentrating on the beach. There can be no new public use of the building without fire suppression sprinklers, so Mack has been working to obtain funds to restore water service. With bathrooms as well, the big building could become an attractive venue for many events.