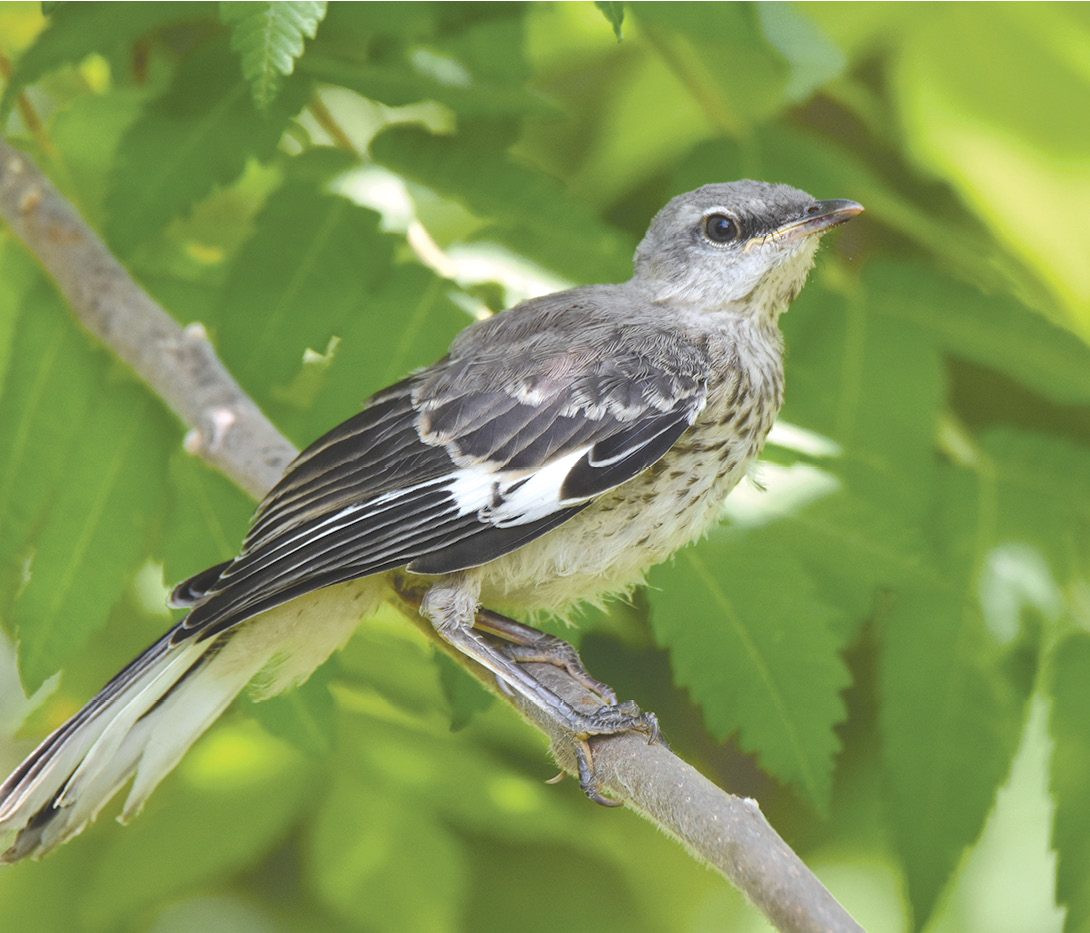 These days a few of my friends and I are participating in the Suffield bird census. We are clutching our lengthy list of birds hoping to check as many off as possible as we peruse all the open space we have here in our town. We rarely leave our houses without grabbing our binoculars, ears tuned to any bird calls which might reveal a new visitor hiding in the trees. More often than not, I have been hearing our mockingbird as he goes through his rendition of other bird calls, as they have been known to sing 200 different songs and when they exhaust their repertoire, they can even mimic car alarms. Many a birder has been fooled by his singing, but it wouldn’t seem right to have him silent.

By this time of year, the mockingbirds are well-established in shrubs and thickets around town. This grey and white bird eats insects and berries and has a leisurely way of flying from bush to bush. The male dives right into a life of domesticity as he selects some prime real estate and begins construction on several nests for his love interest. She weighs in at the final hour and ultimately adds the finishing touches: leaves, cigarette butts, or a piece of foil to her favorite nest. She’ll settle in and lay eggs and both parents will help to feed their young. And, if the female is feeling especially maternal, she may lay another clutch of eggs in a second nest and incubate those leaving her mate to finish the job of raising her first batch of chicks. So they lead a complicated life style which showcases their intelligence and joie de vivre. It’s no wonder that the mockingbird caught the eye of Thomas Jefferson and he kept several as pets to add to the ambiance of his days at Monticello. I’d like to think they provided just the right background noise as Mr. Jefferson was hammering away at the Declaration of Independence.

For me, the mockingbird takes me back to the day when we were raising our brood and trying to get our youngest to sleep through the night. This was before the day of the Internet, noise machines and room darkening shades, and our only advice was from our dog-eared Benjamin Spock book that addressed everything we needed to know about childrearing, including a couple of paragraphs on sleep training. It seems we would just get our daughter settled in for the night and we’d be tiptoeing down the hall when the mockingbird in the shad bush outside her window would really get going. She’d pull herself up in the crib and the two of them, mockingbird and little girl would have plenty to say as the night unfolded. We might have tried giving her a bottle of water and a pat on the back, we might have clapped and shook our fists at the mockingbird who leisurely traveled to the fence and back, but these were temporary fixes. Soon, both would be chiming in, in unison again. It was hard to get mad at either party, as the mockingbird was so cute and our little girl was the caboose in our family, so we cut her some slack in the nighttime shenanigan department. And maybe we knew it was okay to be defeated by this pair. We could lick our wounds and hope to win another battle, fully aware that summer nights with birds singing and little girls cooing was a compromise we could live with. And it was one we would yearn for as the years passed, and babies in cribs turned into teenagers in cars.