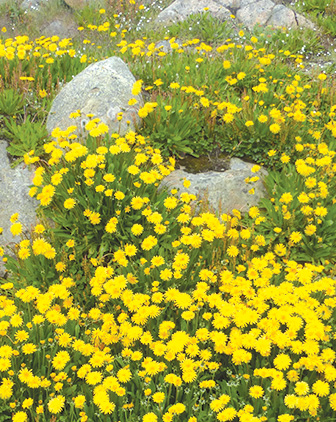 Taraxacum is a large genus of flowering plants in the family Asteraceae, which consists of species commonly known as dandelions. They are native to Eurasia and North America, but the two commonplace species worldwide, T. officinale and T. erythrospermum, were introduced from Europe and now propagate as wildflowers. Both species are edible in their entirety. The common name dandelion is from the French, meaning “Lion’s Tooth.” Like other members of the Asteraceae family, they have very small flowers collected together into a composite flower head. Each single flower in a head is called a floret. In part, due to their wild abundance along with being a generalist species, dandelions are one of the most vital early spring nectar sources for a wide host of our friends, the pollinators. To them it’s a field of dreams.

Taraxacum seeds are an important food source for certain birds. Dandelions are also important plants for Northern Hemisphere bees, providing an important source of nectar and pollen early in the season. Dandelions are used as food plants by the larvae of some species of butterflies and moths. These wildflowers are also used as a source of nectar by the pearl-bordered fritillary, one of the earliest emerging butterflies in the spring.

With a wide range of uses, the dandelion is farmed in small gardens as well as massive farms. Also, it is kept as a companion plant. Its taproot brings up nutrients for shallower-rooting plants and adds minerals and nitrogen to soil. Lion’s Tooth is also known to release ethylene gas, which helps fruit to ripen.