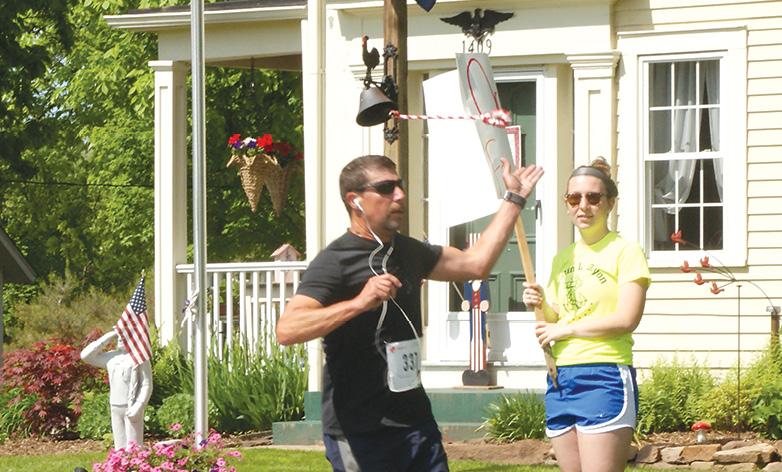 As he passes the Doyon home on Hill Street, runner Scott Brew rings the bell in the front yard. All the runners in the 10K race were asked to ring the bell in memory of Dustin. The young lady was part of the water stop crew there.

The second annual Dustin L. Doyon Memorial Road Race was held at Suffield Middle School on May 25. The main events began with a new 10K run up Hill Street almost to Halladay Avenue and back. The 5K Run/Walk followed, also up Hill Street and back, with its turn-around at about 764 Hill Street.

This year, 163 participants finished the 5K Run/Walk, and 45 finished the 10K Run. T-shirts were given to the first 150 registrants, and prizes were awarded to the top three overall men and women.

Kyle Englander, who managed both races, decided to run this year, his senior year at SHS, so he left all the announcing for the event to Brian Doyon and finished first in the 10K Race with a time of 35:07.62. The first finisher of the 5K Run/Walk was Nick Sinofsky, at 16:46.00. Both winners were members of the SHS 4 x 800 relay team that won in the recent indoor track season.

Kyle said he was disappointed with his 10K time in the Doyon event, but he was happy to report that the proceeds this year were double last year’s. Brian said that over $20,000 was added to the Dustin Doyon fund for granting college scholarships to students from either of the high schools Dustin had attended: Pope Francis High School in Springfield (previously Cathedral) and Suffield High.