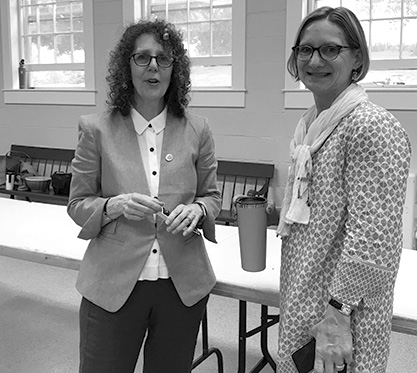 For some the call to a particular vocation can be an “aha” moment. For others, the route is much more circuitous. And so it was for The Reverend Bridget Fidler, senior minister at First Church of Christ Congregational, United Church of Christ, Suffield. Bridget accepted the call to minister at First Church in spring 2009. After ten years of faithful leadership, her last Sunday will be July 21, 2019.

Her journey began in Long Island, NY, where she was born and raised. After graduating from Hunter College as a media studies major/theatre minor, she found employment at the Museum of Broadcasting, now known as The Paley Center for Media, in New York City. It was quite an exciting place to work!

After a move to Minneapolis Bridget began working for ARC (Association for Retarded Citizens), now known as The Arc, in Minnesota. This powerful experience helped Bridget develop her skills in working with a board and volunteers, and being an advocate for social justice for those with disabilities.

Although baptized and confirmed Catholic, as an adult she had no involvement with the Catholic Church. Her first husband, an atheist, had an epiphany and wanted their children to have a religious upbringing. They joined a UCC church and became very involved in the life of the church. Bridget found a strong sense of community and fellowship amongst the congregation. Assistant Minister Janet Lebow was very inspirational for Bridget, and they became close. She also mentioned, with her background, it was the first time she had experienced a female religious authority not wearing a habit!

She had applied to a graduate school program but wasn’t feeling as though it was the right decision for her. During a conversation with Rev. Lebow regarding future plans, she was asked what it was she really wanted to do. Bridget surprised herself when she unexpectedly blurted out that she wanted to do what Rev. Lebow was doing. Rev. Lebow asked her if she’d thought about attending seminary. She hadn’t but the seed was planted. Bridget graduated from Lancaster Seminary, Lancaster, Penn. in 1999.

Her first pastorate was an Associate Minister at the Granby, Conn., UCC Church in 1999. She was a co-pastor for the last six of her ten years there. She left UCC Granby shortly after their congregation voted to become Open and Affirming (ONA), a designation of UCC meaning they affirm the full inclusion of LGBT persons in their church’s life and ministry.

Bridget was called to First Church of Christ, Suffield, in spring 2009. Having previously attended a function there, she remembered she had found the building itself, particularly the chancel, very appealing. She also felt very comfortable with the search committee and the whole interview process. Within one year under Bridget’s guidance, First Church became designated ONA. Bridget has helped guide the church toward a more intergenerational ministry, helping young people become more integrated into the church service.

The decision to leave a congregation is a difficult one under any circumstances. Bridget has been with them through times of joy, times of sorrow, as well as, difficult turns our lives take that are often unexpected, as we journey through life. She, as many of us have, is struggling to take care of a parent who suffers from Parkinson’s disease and needs full time care. Her sister has been bearing that load, and Bridget, after much reflection and prayer, has made the tough decision to be more fully present to help with her mother’s care.