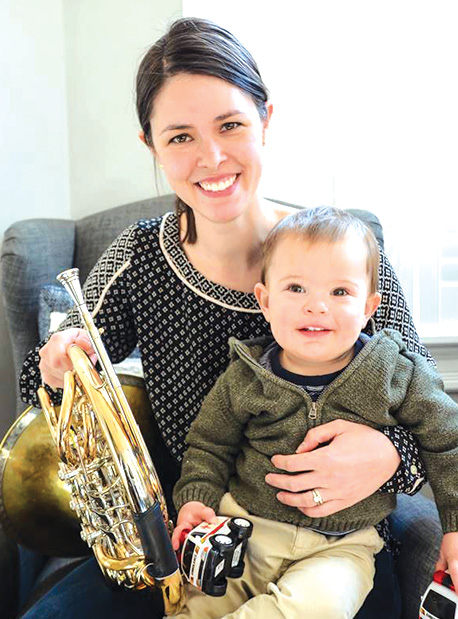 Jenny Ney is holding two of the loves of her life: son Grant and her French horn.

In her 42 years teaching music at Suffield Middle School, Linda Seabury knows a good prospect when she sees one and she saw one in Jenny Sansom: “At 10 years old I knew she had it as a musician; she had beautiful pitch and an incredible dedication to becoming better.” So sure was Seabury of Jenny’s proficiency that she told her class she would quit her job if Jenny didn’t make first chair at the Regional Festival!

Jenny began her musical career in the fifth grade SMS band when she started on the French horn at the suggestion of her mother. “I don’t remember exactly why I chose the French horn, but I loved it!” She took private lessons from Seabury, also a French horn player, and then from Susan Spaulding at the Hartt School of Music. She participated in numerous state and regional music festivals, garnering many honors, and met her future husband, Jonathan Ney, a trumpeter, when both played in the Connecticut Youth Orchestra.

Graduating from high school in 2007, Jenny attended the prestigious Eastman School of Music at the University of Rochester where she received a degree in music performance. While attending Juilliard for her Master’s degree, she worked giving private lessons to children and playing at private school graduations and church services. She credits Juilliard for helping her improve her performance and level of teaching. “The expectations there were very high, and I’m happy I was a little older so as to better manage the pressure,” said she.

Upon completing her Master’s, Jenny has performed in numerous venues, including Carnegie Hall and Lincoln Center. For two years she had the chair at Radio City Music Hall. She explained that the person who has the chair manages her own schedule. Since there are four French horn players in the orchestra at Radio City, two play at a time, splitting the schedule, and the player is responsible for obtaining a substitute if she cannot make a given performance.

She has played in the New York City Ballet’s spring showcase as well as for the American Ballet’s spring recital. She played at the Adele concert, which was broadcast on NBC, and on a video concert release of Roger Waters, cofounder of Pink Floyd. For a few years she played in Quo Vadis, a brass quintet. She has also played for several symphony orchestras, including Harrisburg, Stamford, the New York Philharmonic, and St Luke’s, in addition to giving private lessons and working in the pit on Broadway musicals.

These days, happily married since 2011, and the mother of 18-month-old Grant, Jenny no longer does private lessons, but freelances as a backup on Broadway, commuting from her home in New Jersey. She reports that freelancing can be more difficult to manage with a baby at home, since she might get a call at 4 p.m. for a 7 p.m. show, while at other times she will know a month in advance. When asked which were her favorite shows, she said that growing up, her family listened often to musicals, and she especially liked Lion King, and Les Miserables, so when she got to play in those, it was special to her. She also enjoyed playing in She Loves Me, because “it has an amazing score with a challenging horn part.”

It is fortunate that Jenny likes a good challenge since the French horn is considered by many one of the most difficult instruments to play. In a 2019 article by Rebecca Heilweil, entitled “What Makes the French Horn Notoriously Difficult,” Heilweil reports that “playing it is a matter of endurance and requires pushing steady air through 12 to sometimes nearly 30 feet of tubing, all from a mouthpiece just a few millimeters wide.” But love of music runs in Jenny’s family – her mother plays the violin, her father the bells at church, and her sister Brenna the trumpet – and she welcomes the challenge. Jenny also plays, speaking of challenges, the natural horn, which is the precursor to the French horn. It has no valves, so one changes the notes by changing the pitch of the mouthpiece and moving one’s hand inside the bell of the instrument. She loves playing Brahms, as she considers his writing for horn very melodic.

Oddly enough, Jenny prefers not to listen to music at home, instead relishing the quiet. When her husband comes home from work, though, they listen to a lot of classic rock, and it appears that their son, Grant, is carrying on the musical family tradition. “He loves a wide range of music, but in utero he did a lot of kicking while I was playing Mozart concerts and operas, so I think those are his favorites!” Jenny reported.

It was a great pleasure to interview Jenny and more so to listen to her magnificent playing. To hear some pieces, go to Jennyney.com/about-me-1.html.