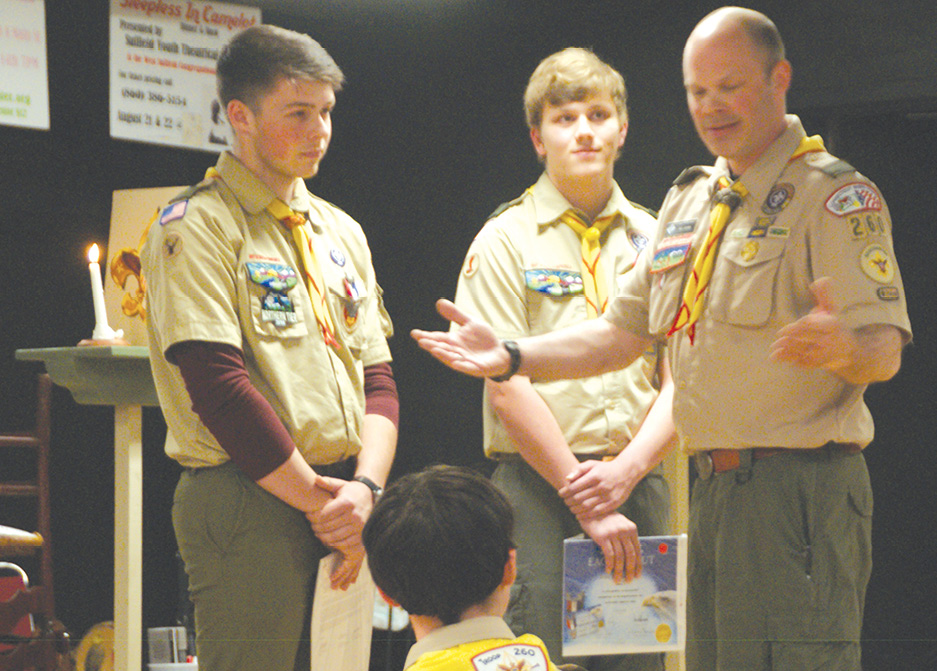 Scoutmaster Mike Cremins gestures as he speaks about Troop 260’s two new Eagle Scouts: Jonah Berrien, left, and John Killam. Cremins is quoting Lord Baden-Powell, who created the Boy Scout program in 1910: “It is the spirit within, not the veneer without, that makes the man.” In the foreground, Senior Patrol Leader Alex Cremins, the ceremony’s M. C., looks up at the action on stage.

With their traditional candle-lighting ceremony on May 21 at Second Baptist’s Fellowship Hall, Troop 280 awarded the Eagle Scout rank to Jonah Berrien and John Killam, both of whom had crossed over from the Cub Scout program in March 2011. Both had earned various awards along the way, both were members of the Order of the Arrow and both had earned the required 21 Merit Badges and completed their Eagle Scout Public Service Projects.

Jonah’s project was the renovation and improvement of the memorial garden next to the Old Center Cemetery behind the First Congregational Church. He led a team that replaced the path, constructed new benches, and installed new plants requiring minimal maintenance.

John’s project concerned the plight of the Monarch Butterfly. After research and planning, he organized information sessions teaching over 200 people about the need for replacing lost areas of native milkweed, the species’ only food. He then led volunteers gathering and distributing milkweed seeds. Months after a Scout seed-planting outing he directed, it was reported that hundreds of new Monarchs had completed their metamorphoses through the egg-caterpillar-chrysalis cycle and emerged as beautiful butterflies.