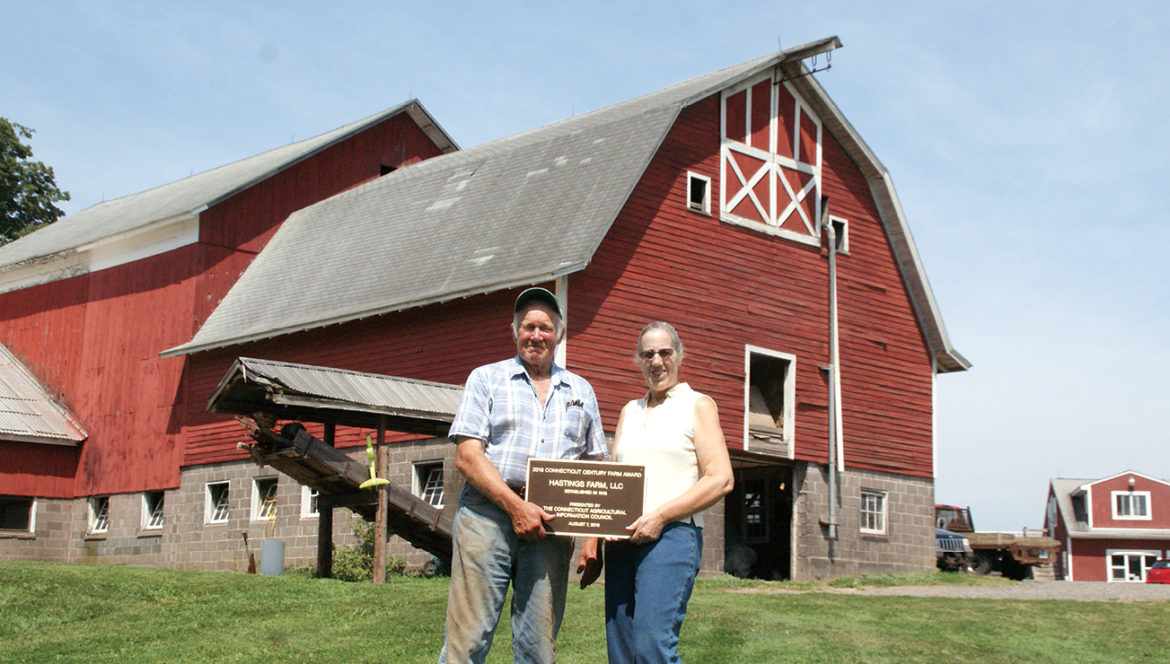 Larry and Susan Hastings are pictured with the bronze tablet they were given a few days before when their Hill Street farm won the 2019 Connecticut Century Farm award. The cow barn behind them was added in 1947 to the old sheep barn at the left by original proprietor Howard Hastings, whose grandson Larry now operates the farm with his family.

Members of the Hastings family went down to Hamden on August 7 to attend Plant Science Day at the Connecticut Agricultural Experiment Station’s Lockwood Farm, near Sleeping Giant State Park. This is a big, yearly event, with lectures and demonstrations and meetings with experts, but this year’s highlight was when the family’s well-known Suffield farm on Hill Street was presented with the 2019 Connecticut Century Farm Award. This is a significant award, given each year to “a farm that has been in family operation for more than 100 years and has great potential to be successful for at least another 100 years.” The recipient is selected by the Connecticut Agricultural Council.

This is the second time that the 70-year-old award has been given to a Suffield farm – the Coulter Farm earned it in 1998. Only one other Connecticut town has had two winners; that was Wethersfield.

Susan Hastings wrote about the farm:

“Hastings Farm is currently farmed by owners Lawrence and Susan Hastings and their daughters Megan and Lauren, with help from extended family and several long-time employees who are like extended family. The original 59 acres was acquired by Lawrence’s grandfather Howard Hastings in 1916, a time when farms were quite diversified. There were sheep, pigs, tobacco, milking cows and a small orchard. . . . the farm now totals 200 acres, with 138 acres of that being preserved farmland.

“By the 1930s the Hastings family had changed the focus of the farm to concentrate on milk and tobacco as the main crops, with the first milking machine and tractor on the farm, a Farmall F12, purchased in 1936. . . . In 1956, when Howard died and Richard Hastings (father of Lawrence) took over, the focus was changed again to only dairy production, ..

“In the 1990s the farm passed from Richard and Lawrence to Lawrence and Susan, and then in 2010 an LLC was formed with the next generation involved in the ownership and operation of the farm to ensure its continuance. In 2011 the focus of our products shifted once again to include processing of our milk on the farm, and a farm store, to take advantage of the benefit of value- added products. Today our Greek style yogurt and Cream-line milk can be found in grocery stores and farm markets throughout the state. A small herd of beef cattle can also be found wandering on the farm to provide our farm store with home grown grass feed beef.

“Hastings Farm has become a blend of the old and new, with the original barn dating from circa 1830, and listed on CTBarns.org, to the newest barn addition in 2016 to house the Delaval VMS robotic milker, the first of its kind in the state. With innovation, hard work, and a strong family bond we hope to be here for another 100.”

Next Article
New Owner for Suffield by the River
As owner and, until now, executive director of the well-regarded facility at…