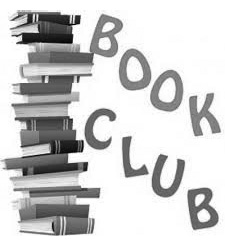 The book titled Book Club Reboot: 71 Creative Twists and written by Sarah Ostman and Stephanie Saba, describes Books in the Parlor, one of Kent Memorial Library’s book groups. At the end of this article is the description of the group as it appears in the book.

Books in the Parlor and the other three book groups which the library hosts welcome new members, both male and female. If interested, please contact Jackie Hemond (jhemond@suffield-library.org or 860-668-3896). The other book groups are: Thursday Afternoon which primarily discusses fiction and meets at 12:30 p.m. on the second Thursday of each month; the World Book group meets at 7 p.m. on the third Thursday and discusses mostly fiction written about world locations or by world authors; and the Suffield by the River group discusses primarily fiction and meets the last Thursday of the month at 2 p.m. The September meeting for Books in the Parlor takes place on Tuesday, September 24 at 2 p.m. at the Phelps-Hatheway House (probably in the Visitor’s Center). The discussion will be on:

Genius of Place: The Life of Frederick Law Olmsted by Justin Martin 496 pages, published in 2011

Frederick Law Olmsted is arguably the most important historical figure that the average American knows the least about. Best remembered for his landscape architecture, from New York’s Central Park to Boston’s Emerald Necklace to Stanford University’s campus, Olmsted was also an influential journalist, early voice for the environment, and an abolitionist credited with helping dissuade England from joining the South in the Civil War.

What many do not know is that Olmsted is a Connecticut native. He grew up in Hartford’s North End and is interred in Hartford’s Old North Cemetery. Olmsted left his mark in Connecticut by creating parks and private commissions in New Britain, Hartford, and Bridgeport and eight other towns. Major parks and properties designed by Frederick Law Olmsted in our state (with various partners) include Walnut Hill Park (New Britain), Keney Park and the grounds of the Institute of Living (Hartford), and Seaside and Beardsley parks (Bridgeport) He also designed Forest Park in Springfield, Massachusetts.

Here is the description of the group from Book Club Reboot; “When a construction project forced the Kent Memorial Library to a smaller, temporary location in 2014, the new library director, Jackie Hemond, started brainstorming creative ways to publicize the fact that the library was still there for the community. At the same time, Hemond was eager to offer new daytime programming that would appeal to older adults, instead of the children’s programing and evening events the library typically offered.”

And so Books in the Parlor – a book club partnership between the library and the Phelps-Hatheway House – was born. Located in the village center of Suffield, the Hatheway House is a historic house museum that was built by a wealthy Connecticut merchant in 1761. Today, the museum displays an extensive collection of antiques that illustrate the luxurious lifestyle lived by the original inhabitants.

The book club – currently a group of ten women – gathers in one of the Hatheway House’s elegant rooms on Tuesday afternoons, when the museum is closed to the public. In keeping with their eighteenth-century surroundings, they read historical fiction and nonfiction that relate to the periods when the house was lived in. The group’s favorites have included Midnight Rising: John Brown and the Raid That Sparked the Civil War by Tony Horwitz, about the abolitionist John Brown whose surprise strike on Harpers Ferry propelled the nation toward war; and March by Geraldine Brooks, a novel that imagines Little Women from the perspective of Louisa May Alcott’s father.

“Our members are keenly interested in American history, and their experience and knowledge add to the group’s discussion,” Hemond says. One member is an expert on historic quilts and has brought samples to add to their discussions; other members are history buffs who provide insight into the histories of Connecticut, Suffield, and the Hatheway House.

Since Books in the Parlor’s members are all women, future book selections will focus on prominent women from New England history, including the Quaker abolitionist Prudence Crandall and the architect Theodate Pope Riddle. “It’ll give us more of a feminist perspective,” Hemond says.