The red ribbon falls away as Marshall Boone, 4, wields his scissors with help from Melissa Mack, left, and Jackie Hemond, plus emotional support from his sister Charlotte, 7. Rep. Tami Zawistowski is behind Charlotte; Will Hermann, seated at the right, represents those who will appreciate the new Mary Anne Zak entrance to the library.

Finally! On June 29, as First Selectman Melissa Mack had announced earlier in June, Kent Memorial Library opened the doors of its renovated and remediated home on Main Street. Music, entertainment and happy satisfaction filled the air when library enthusiasts and plenty of others crowded inside after the requisite ceremony in front of the new entrance. There were, of course, welcoming and thanks-giving speeches on the Bank Lane sidewalk, followed by a symbolic ribbon cutting.

The day started with the human chain book brigade passing some of the last books from the interim library on Ffyler Place hand-to-hand up Mountain Road to the library’s Main Street entrance. Then came the ceremony: The speakers included Library Director Jackie Hemond, First Selectman Mack, Library Commission Interim Chairman Michael Alexopoulos, and, most impressively, Mary Anne Zak, the much-loved teacher, historian, and sensitive social commentator now honored with her name on the new, accessible entrance. Her son, Michael Zak, was present, as well as two daughters of Warren Platner, the architect 50 years ago who designed the controversial modernist building, now updated with accessibility. 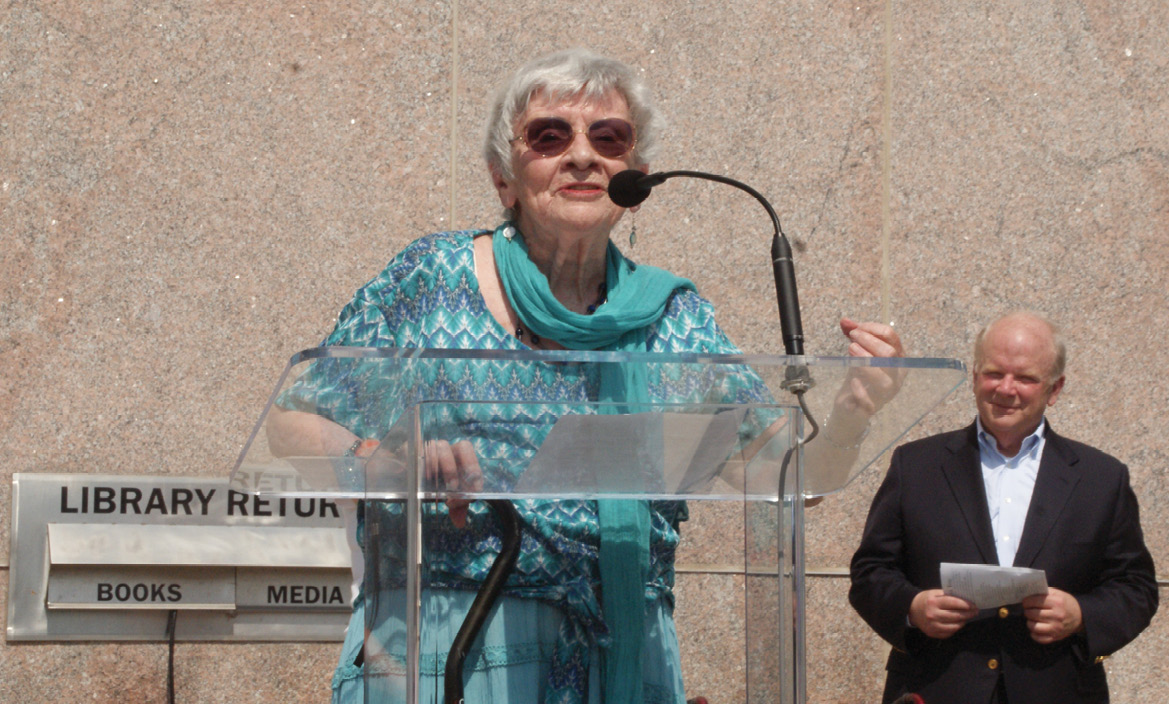 Mary Anne Zak speaks expressively at the June 29 opening ceremony for the Kent Memorial Library. At the right is Michael Zak, major donor for the new Mary Anne Zak Entrance.

Little Marshall Boone, age 4, cut the ribbon with help from Hemond and Mack and emotional support from his big sister, Charlotte, 7. Volunteer Jim Irwin, impressively garbed for the role, served as elevator operator for those who didn’t choose to use the grand staircase in the new lower lobby.

Upstairs, visitors found much to admire and enjoy. The beautiful circulation desk, new in 2012, was still in place, but everywhere else there was a very new look: new carpets and faux wood flooring, new or refinished shelving, surprising new glass ramp sides with new wooden handrails, and a lot of new wooden and upholstered furniture. Colorful ribbons were festooned about; snacks were offered in the café area; “tea-cup” raffle prizes added to the brilliant decorations. Catalina LaPointe twisted and gave away some crazy balloon animals to happy kids, who could also enjoy some small but real animals and have their pictures taken at the photo booth. Al the Magician demonstrated his capabilities to several generations.

Caelie Flanagan sang, with keyboard and vocal support from her brother Jack. Several local organizations had set up tables and were publicizing their activities. A few local authors offered autographs and discussion at the big granite table, now relocated out of the historical room.

Members of the library staff happily exhibited the new shelving and considerable new furniture. Most notably, all the former alcoves are gone, fiction is now in mid-level south, and non-fiction is in main level north. Children, “young adults,” computers, and reference remain where they were, but with a grand new desk for the children’s librarian.

Magazines and newspapers are now in the café. DVDs and audio books have been moved to the computer room. Classics are segregated on the lower level at the foot of the north ramps, where there had been a display case. The genealogical and historical books that had shared the teen space at top-level north (and the locked alcove there) will be in the historical room when that area is re-established, perhaps in a month or two.

Later in the day, a talented a cappella trio called Time Was sang in the lower lobby, and some visitors and staff members enjoyed dancing in the new upper lobby with music by WMAS DJ Chris Kellogg. It was great to have the “big house” back in business.

Next Article
Suffield’s New Superintendent Charting the Course
The new Suffield Public Schools Superintendent, Timothy Van Tasel, has been a…