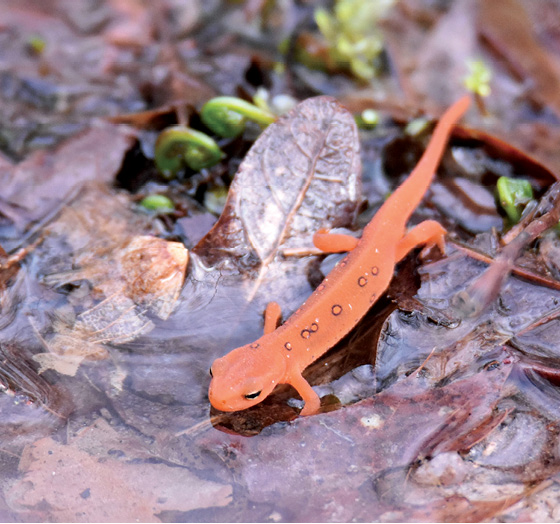 This little newt is in the red eft stage of his life cycle. He’s not uncommon in local woods.

There were many great things about my childhood best friend. One of those was her family’s school bus that they had turned into a camper long before the word glamping was coined. They had painted it white with blue trim and jury-rigged calico curtains in its windows. We got to play in it in the yard which was a dream. We jumped from seat to seat with no bus driver to yell at us, pretended to drive it careening around corners at high speeds, and sometimes we just sat and inhaled that naugahyde smell.

While I never got to go on the road trips, I did get to wave to them as they pulled out of the driveway heading north while I counted the days. When they would return from their annual pilgrimage to the White Mountains, I would get to hear about their adventure, especially in the wildlife department. And, what fascinated me most was their report on the orange salamanders that would be all over their camp site. My friend’s brother was witty and rather cosmopolitan and he gave the salamanders the collective dignified nickname of Fredrick R. Chunkelmeyer, and that’s a name that sticks. So as they filed off the bus I would eagerly await the Chunkelmeyer head count. I was green with envy.

What they were seeing was the Eastern newt in its terrestrial stage, the red eft. This small salamander can be found in the woods, especially after a rain, and we’ve encountered many on the New England Trail right here in Suffield, heading up the hill from Sunrise Park. The newt starts life in a pond as an egg which hatches into an aquatic larvae. He sprouts legs, swaps his gills for lungs and emerges from the water to spend his days on land in his red eft phase. Then, after a few years the aquatic lifestyle seems where it’s at, and he returns to the ponds to finish his life as a green newt. Having absorbed his gills for life on the topside, he breathes through his permeable skin and can’t resist swimming to the surface for a gulp of air from time to time. So, like any good amphibian, the newt is all about metamorphosis and sure knows something about the big change. When I taught school, we delved into life cycles and the big changes that butterflies and amphibians were famous for. And now when my hiking group shares the trail with the red efts, we too have change on our minds.

Change is coming and the katydids know it as they ramp up. They provide a heart wrenching soundtrack all around town as folks put away their beach floats and make a pilgrimage to CVS to pick up number two pencils and stacks of index cards. We say goodbye to summer, and kids file out for the bus, and another school year is upon us.

Clearly, amphibians aren’t the only ones with change a-brewing. I remember as a teenager returning to school after summer vacation and being shocked at the changes that occurred. Short pimply faced boys would return from summer vacation having sprouted up several inches and sporting unruly mustaches. Girls would have spent the summer mastering the art of eyeliner and plunging necklines altering their whole look. There’d always be someone who had a complete change and had given up their time on the sports fields for an electric guitar, determined that would be the ticket. You just never knew exactly what you would find after the summer hiatus. And the change is not limited to students. Just maybe I can channel my inner newt and get cracking, hoping to be a better version of myself. But if my antiquated hairstyle and fashion sense are any indication, it might be too late this year. So I’ll set my sights on the next fall. November 2020 sounds about right. I think Fredrick R. Chunklemeyer would approve.