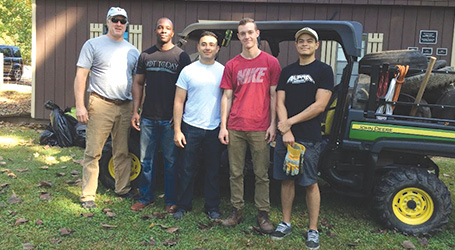 Source to Sea was held on September 28 this year. It is a day designated for volunteers to gather and participate in the regional event to remove trash from the Connecticut River. New England States along the river, from its headwaters in northern New Hampshire to the mouth of Long Island Sound, rally volunteers in their respective states to make the river a cleaner, safer waterway.

Helping Friends of the Windsor Locks Canal this year were four active duty men from Westover Air Force Base in Chicopee, Mass., who volunteered to help clean up the river. Fifteen tires and several bags of trash were collected for disposal from along the river, park and trail during this event.

Friends of the Windsor Locks Canal have been participating in the clean up since Steve Sorrow founded the group in 2003.