The fresh new feel of the library, along with the expansive public space, continues to impress, and patrons are learning the new facilities and the new locations of old resources. New chairs and tables have been arriving, and small details, like two broken joints in the ramp handrails, are being corrected.

One big surprise was the broken window discovered on July 20 as librarians arrived to set up for a Saturday morning magic show in the children’s room. One layer of one of the big new double-pane windows facing Main Street had shattered, evidently from an external impact; the inner pane was still in place. The show was shifted to the gallery, a new window was ordered, and all was back to normal several weeks later.

During the move-in, several library items stored in the old Bridge Street School could not be found. Among them was the library director’s desk, a plain, comfortable desk that nicely suited the director’s small office. Director Jackie Hemond was given another desk, which may suffice.

After struggling with where to install the community bulletin board (which is not allowed in the new entrance), Director Hemond put the board in the narrow corridor across from the lower level ladies room.

During the early weeks, the second round of required quarterly environmental testing was completed. The results were again within limits.

Many regular library activities that had been held in the Senior Center and elsewhere for five years are now back home. However, when a book discussion group led by popular discussion leader B. J. Smith began as scheduled in the newly refurbished auditorium, the noise of the new air distribution system was so offensive that the event moved out into the lower lobby. A few evening visitors entering from Main Street managed to find their way past the discussion. The noise level also troubled a Selectmen’s meeting held in the auditorium on July 17. Ways to reduce the noise level in that room and the gallery are being discussed informally. 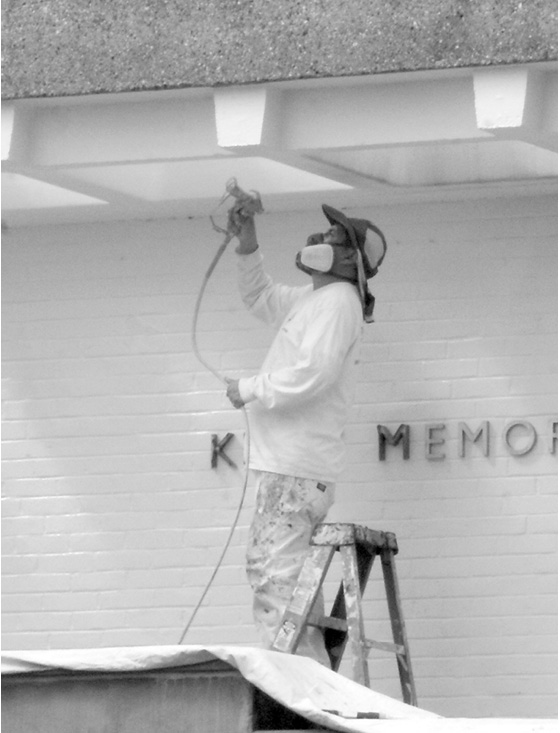 The gallery has been used for several meetings, and new storage cabinets and a useful sink were installed in August. Unfortunately, that room, sometimes called the art gallery, opened artless, as it was thought that the previous picture moldings that had been used for decades had been removed. As it turned out, the moldings were found to be present, but of limited use. Possible next steps are being considered.

In mid-September, the first load of historical material was brought back from secure storage in Windsor, and volunteer Anne Borg began the task of shelving the files in the new moveable banks of shelves. The room may be back in service by November.

Outside, as the daylight grew shorter, the library staff found that their departure after 8:30 p. m. was troubled by the lack of lighting on the two sets of new concrete stairs at the south side of the library. The architect had provided eleven light fixtures along the new switch-back ramp by the north side exit, but he left the stairs at the south side in the dark. The Library Foundation has agreed to pay for the needed lighting. The Foundation also paid for diaper-changing tables installed in September in the two upper level restrooms.

Also in September, a painting crew began the task of applying the final coat of white paint on the brick exterior of the building. This had been withheld several years ago because of a lack of funds but was included in this year’s budget. Soon the old building will shine as bright as the new entrance.