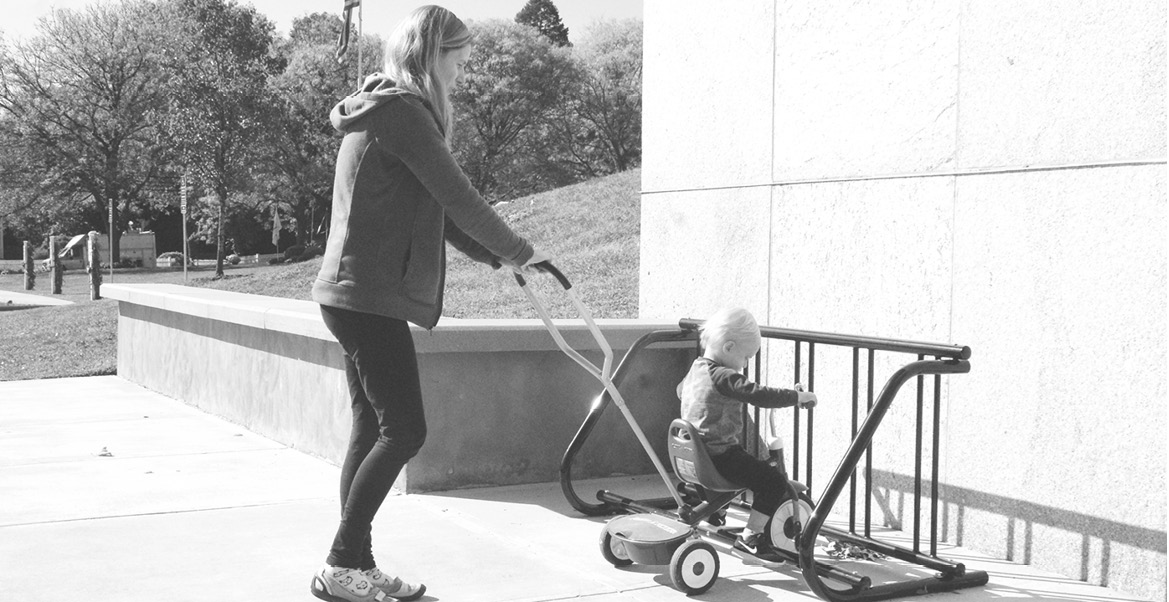 With a little help from her son Jack, 2, Jill McNerney maneuvers Jack’s tricycle perambulator into the new bicycle rack at the library.

The library punch list grows shorter. That list of not-quite-finished items that typifies all significant building projects has happily lost some of its items; work continues on others.

Electricians buried power cables for three new light posts to illuminate the concrete stairways leading down from the new south side door. That project, donated by the Library Foundation, then paused in early October awaiting delivery of the light posts themselves.

The first half of the historical archives material, returned from storage in September, has been distributed on the new shelving of the Spencer Historical Room. The remainder was expected soon.

A five-slot bike rack from an unannounced donor has been bolted to the concrete pavement next to the Mary Anne Zak Entrance.

A set of new picture hanging rods for the gallery was ordered in early October after their approval by Fran Milliken, who manages the library’s art exhibitions. It is expected to be available in time to hang the first new exhibition: a grand display in November of the works of current Suffield artist Barbara Coffin, who volunteered that funds raised by sales of the paintings would be donated to the Second Chance Shop for the Village for Families and Children.

A new coat of white paint on the outside of the entire building was completed in September. The place looks brightand beautiful.

Next Article
Unknown Soldiers
Seventy-six years after his death, the government is still looking for my…