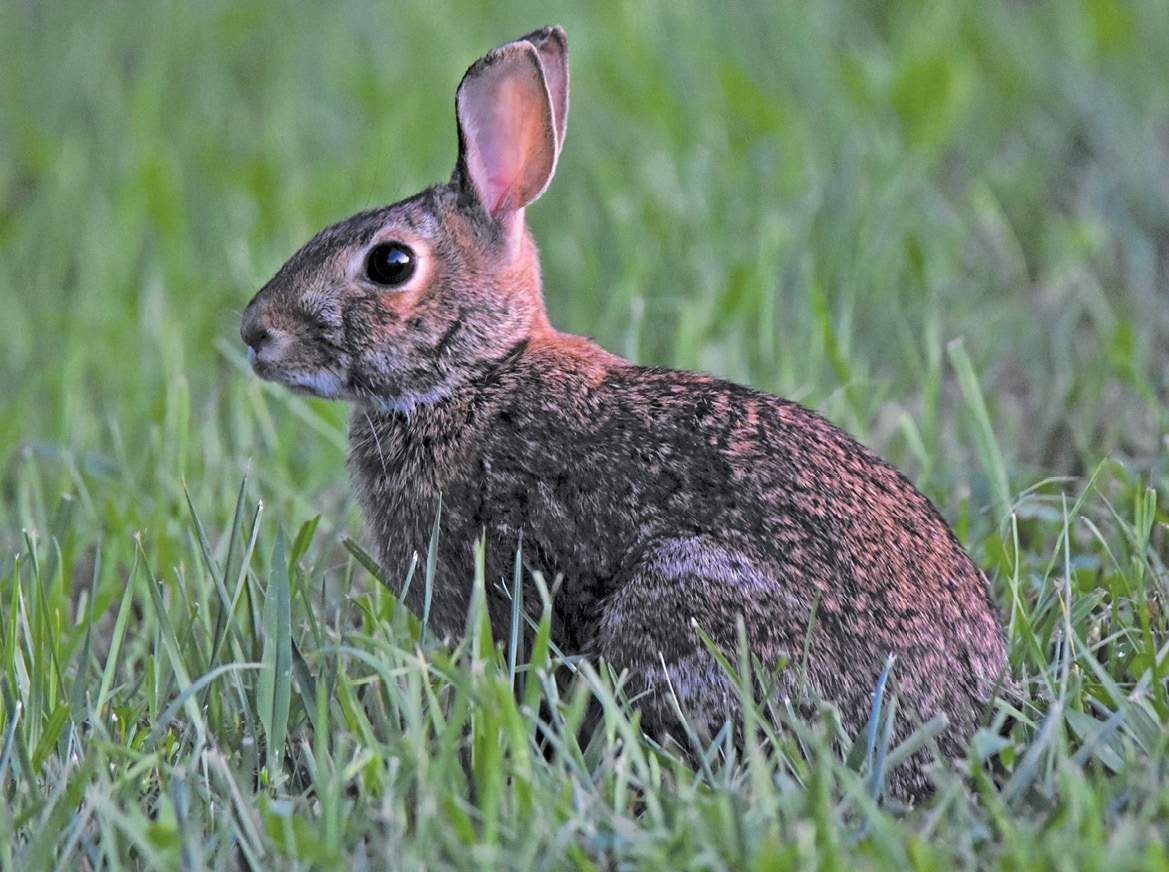 Recently, I had a chance encounter with a wildlife biologist in the woods. It was on par with meeting a rock star, and I briefly lost my ability to speak, which is something my family has been wishing for.  I hung on her every word as she talked about migratory birds and habitat until eventually her narrative turned towards rabbits. Most of the rabbits we see in these parts are eastern cotton tailed rabbits. They were introduced in the 1800s and have multiplied as rabbits are known to do. They have done so at the expense of the native New England cottontail. Both rabbits look very similar so DNA testing needs to identify the species of rabbit.

It turns out that the New England variety prefers thickets and tangled vegetation over meadows, but they are very adaptable. Both types of rabbits are lagomorphs, not rodents. They have 28 teeth that never stop growing and large veins in their ears to help them regulate their body temperature. Rabbits are pretty entertaining, and I learned that they are most active around dawn and sunset. Despite their reputation for being at the top of their class in the area of reproduction, they are solitary much of the time. When the female rabbit, called a doe, is ready to give birth, she makes a nest out of a shallow depression in the ground and lines the nest with her fur. There, she gives birth to her babies usually between four and 12 per litter. The doe has very rich milk and often only nurses her young once or twice a day for a couple of minutes. They get what they need and by three weeks are living independently, scouting out gardens across town to visit as the sun goes down. It’s a good thing that rabbits mature so quickly as the mother rabbit can mate the same day that her babies are born, setting the wheels in motion for more bunnies to populate the planet. But checks and balances are Mother Nature’s strong suit, and rabbits play an important role in the food chain. Many provide a meal for birds of prey, fox, dogs, and just about any carnivore in these parts.

I spent many weeks looking for rabbits when I should have been cleaning the oven. And everywhere I went, the conversation turned to these long-eared mammals. After considering the local population and all the cute or menacing things they were doing, we couldn’t help ourselves as we delved into the world of rabbits from children’s literature. Folks sure have their favorites and the top picks were Peter Rabbit, B’rer Rabbit, Thumper, the March Hare, Flopsy, Mopsy and Cotton-tail. My friends who are perpetually stuck in the 60s put their oar in for the White Rabbit from Alice in Wonderland. This segued into their impromptu rendition of Jefferson Airplane’s White Rabbit written by Grace Slick, with the help of some psychedelics, recalling that her parents had read to her from Alice in Wonderland at bedtime when she was a child. (It is really hard to get from point A to point B these days.)

Personally, I keep a soft spot in my heart for Uncle Wiggly, an engaging elderly rabbit with rheumatism. My parents had read the stories to me as a child, and my dad affectionately referred to my mom as Nurse Jane Fuzzy Wuzzy after the muskrat lady that Uncle Wiggly palled around with. Those were the days when there were lessons to be learned from the rabbit gentleman’s misadventures. We continued the tradition sharing Uncle Wiggly with our children, and they are forever scarred by the villains in those stories including the Skeezicks and Pipsisewah. Man, they don’t make villains like that today. Actually, I think today’s villains are far worse, and they find their way into our living rooms and psyches. I think I’ll head out to see what the rabbits are doing behind the barn. It seems like a wonderful distraction.