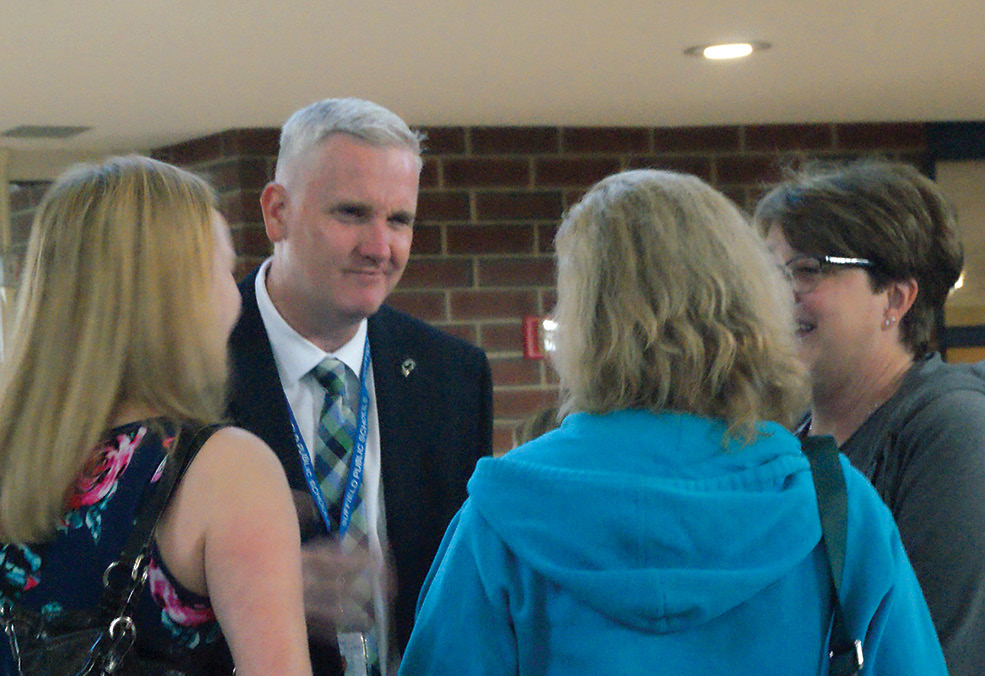 At the Welcome Back Convocation on August 27, new Superintendnet of Schools Timothy Van Tasel speaks informally with several teachers near the high school doorway where he had an opportunity to greet returning and new personnel.

A new Suffield school superintendent and 25 new teachers and central staffers were introduced at this year’s Welcome Back Convocation on August 27, the day before classes started. Essentially everyone in the entire school system gathered first in the high school Commons for reunions and a breakfast snack, then they filled the auditorium for the welcomes and more serious business. The program opened with the National Anthem, nicely sung by SHS student Eva Nick. The Convocation was an interesting affair, with some significant speeches.

Members of the Board of Education present were identified, and Board Chair Sue Davis introduced First Selectman Melissa Mack, who expressed her pleasure at the cooperation between Town administration and the schools, “working together for common goals.” Central Staff personnel were identified. When the custodial crew was mentioned, everyone rose to applaud. New Superintendent of Schools Timothy Van Tasel added a personal story, revealing that one of his first school jobs was as a custodian at McAlister, 25 years ago!

The big image projected on the stage screen listed “Making Connections” as the theme of the occasion, and Sue Davis emphasized exactly that. She spoke also of her daughter Katy’s tenth grade history teacher, who championed Katy at a key point in her life, with major beneficial effect.

Each of the newcomers rose as they were named and welcomed.

Math teacher Mark Janik, who is president of the Suffield Education Association (the teachers’ union), said he was pleased that the schools now have a solid administrative team. He invited the teachers to remain after the main program ended for a short meeting of the SEA.

New Assistant Superintendent of Schools Michelle Zawawi, who had previously been a member of the Board of Education, spoke briefly and introduced each of the schools’ top leadership. Paraeducator of the Year Carol Frost and Teacher of the Year Erin Shea were next. Their presentations, as well as other comments throughout the Convocation seemed to focus on social-emotional matters and student mental health.

Zawawi then introduced new Superintendent of Schools Van Tasel, who she called “an outstanding leader, committed to our community and our students.” But before he spoke, Zawawi presented him with a gift: a Suffield Public Schools T-shirt. Van Tasel reviewed the Board of Ed’s goals and discussed meeting them. It was in his talk that academic achievement received considerable attention. In closing, he revealed another personal fact: his hobby of what he called high altitude adventure. And he focused on the simple carabiner as a powerful connection. He concluded by distributing small lapel-pin carabiners (shaped rings used in mountain climbing) to everyone present as a reminder of the powerful connections his audience would make with the District goals, with their colleagues, with their families and their students’ families, and above all, with the students themselves.