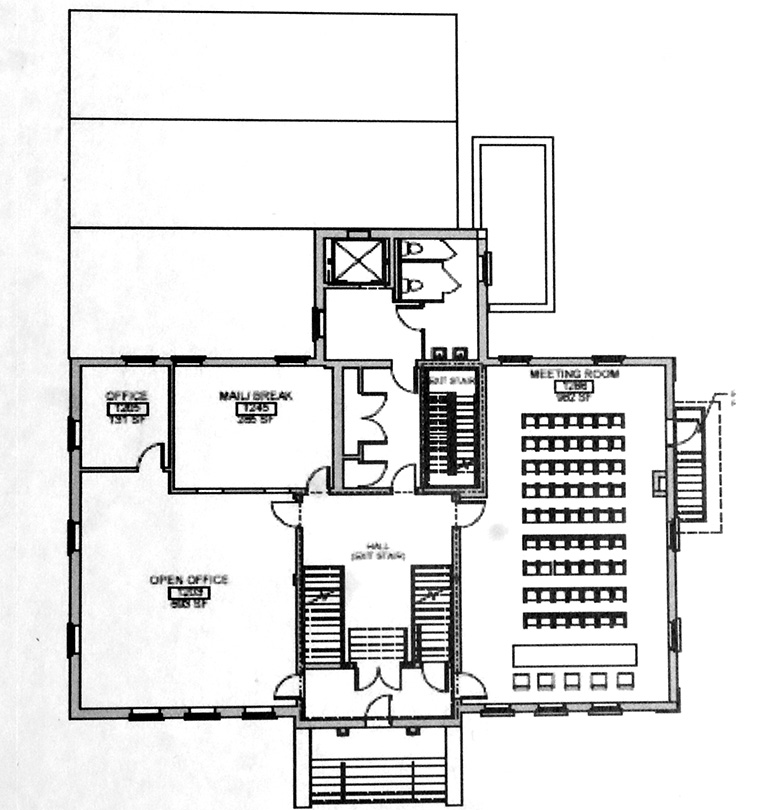 This concept drawing shows a main level layout being considered for the planned Town Hall renovation. Here the previous Town Clerk’s office and vault on the west side is replaced by a 63-seat meeting room, and the east side would be an office, the mail room, and a large space that might be shared by the tax and assessor’s departments. The front stairs outside would be supplemented by a ramp, and the elevator would provide entrance from the lower level. A new, short outside stair would be required for the meeting room.

At the Permanent Building Commission meeting on September 5, Angela Cahill, from QA&M Architects, reported that planning had neared the end of schematic design. The Gilbane representatives reported the present stage of cost estimating, which suggested a cost marginally within the $4.9 million available in the Town’s planning. First Selectman Melissa Mack said she was not alarmed, considering the early stage of the project.

The several concept drawings that were shown included two different possibilities for the building’s lower level. Both showed the Town Clerk’s office relocated to part of the south end of the present building on that level, where there are now offices and a meeting room. But one possibility included an extension to the building’s footprint to accommodate a new, larger, vault, while the other showed the new vault next to the Clerk, within the footprint, which affected the size of several offices.

A matter related to the vault was what security would be required for a temporary vault – “swing space” during the construction period. First Selectman Mack had determined that the State required a temporary vault just as secure as the final one, so there was some discussion of phasing the construction in such a fashion that the existing vault could remain in use during renovation.

Concept drawings for the main and upper levels were the same for either of the alternative vault locations on the lower level. A major new feature is a large meeting room on the main level. There are also several large, shared, open offices. None of these concept drawings are considered final.

The decision as to just which Town offices would be in the Town Hall is affected by whether or not the Town acquires the capacious building at 1160 South Street for the highway garage, which has considerable office space on both floors at the front end. Architect Cahill said that issue has not affected the Town Hall planning so far, but decisions will be needed soon. In any event, at least some Town offices will be somewhere other than Town Hall.