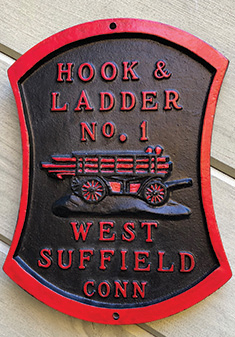 In 1853 not having a fire mark could be disastrous. A hapless home-owner could find himself arguing price with three fire chiefs while his house burned to the ground. One fellow not only lost his house, he lost his life when the argument became as heated as the fire. A fire mark would have prevented all that by indicating which fire company would fight the blaze.

Those were the days when insurance companies practically owned the fire companies. A fire mark nailed under the eaves of a building meant the assigned fire company would work very hard to save the building because they got paid according to what was left standing.

The West Suffield Ladder Company was one of the forerunners of the present Suffield Fire Department.

This ladder truck has a rather interesting history. It was ordered from the Providence Ladder Company, Providence, Rhode Island, and was shipped to Connecticut by train. It fell off the train and was smashed. The smashed Ladder Truck was rejected by local officials and was sent back to Rhode Island. Shortly thereafter a new (or different) ladder truck arrived with OWEGO imprinted on the rear of the frame. The OWEGO imprint remains a mystery.

In later years the truck was known to be owned by the Viets family, who purchased it at auction when the West Suffield Fire Department disbanded. The Vietses were going to make it into a tobacco wagon. After many years of sitting in the Viets’ barn, Fred Miller of Sheldon Street was smart enough and kind enough to go to the Vietses and make a deal with them to acquire it.

Mr. Miller kept the truck for many years. When the Suffield Fire Museum came into being, Mr. Miller donated it to the Firemen’s Association for the museum, where it is housed today.