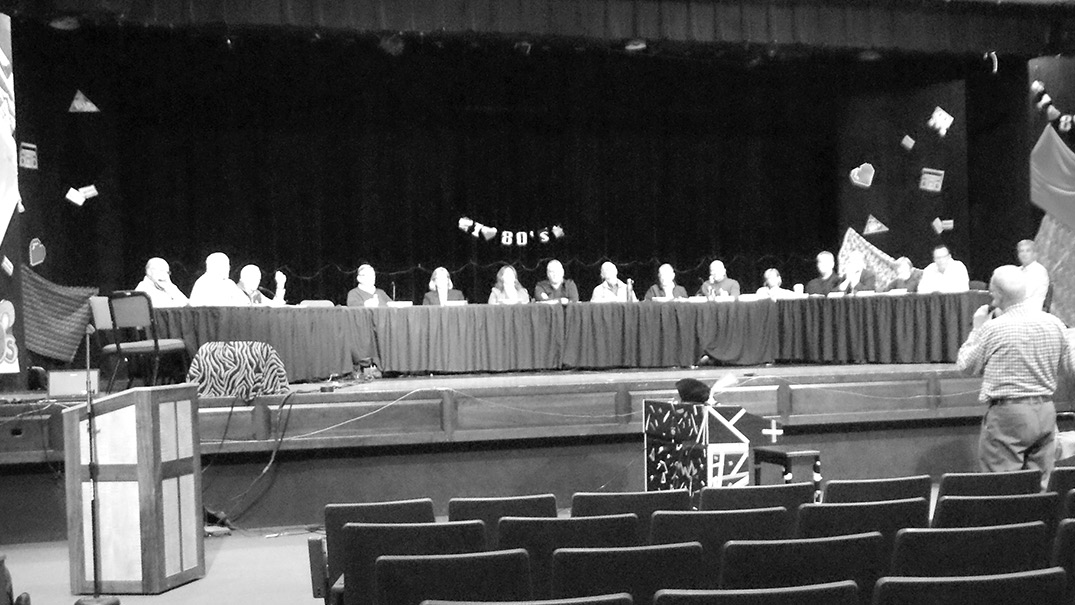 Town Engineer Gerry Turbet describes roadway matters to the members of three Town boards who met on November 6 to consider whether to proceed with a project to relocate the Town Highway Garage to a renovated warehouse on South Street. From the left: three members of the Permanent Building Commission, four selectmen, and eight from the Board of Finance. The SMS stage was decorated for a school event.

Or should the headline be “Ffyler Place Project Nixed,” because the two projects are inextricably joined. But the November 6 tri-board Special Meeting of the Boards of Selectmen and Finance and the Permanent Building Committee discussed only the purchase of the existing warehouse/office building at 1160 South Street to become the highway garage. That would free the Ffyler Place property for developer Kevin Casey to build apartments there, which have already received several key approvals.

At the tri-board meeting, developer Casey explained how problems in the South Street building would be corrected. With the help of architect David Quisenberry of QA&M Architects, he told how six inches of added concrete would make the floor strong enough for the heaviest highway trucks. A rusty portion of the roof would be replaced and warranted. Some concrete blocks in the north wall damaged by leakage would be replaced. He described many other updates that would make the building suitable for highway garage use. As a bonus, he would install an elevator and make other improvements in the office space in the front of the building to provide plenty of rent-free space for Town staff that won’t be accommodated by the renovated Town Hall.

Most importantly, he had made plans to buy a 25-foot strip along the south side of the warehouse property from the new owners of the Executive Airport Parking lot next door. This would allow trucks to enter eight immense doors along the side of the building, avoiding the necessity to enter at the rear of the long building and maneuver inside to the parking bays. The Town salt shed would be located behind the garage in a larger segment of the purchased land.

Garage access would be from a new, shared roadway on Town property north of the new warehouse next door at 1150 South Street. The new road would also serve the relocated Town fueling station and lead to other potential industrial land.

Following the presentation, 14 members of the three boards came forward to sit onstage, and there was considerable discussion. A major concern was doubt that the new side doors would be truly practical, in spite of assurances that there was adequate turning space. There was concern about the safety of trucks exiting onto South Street. Town engineer Gerry Turbet, Town Planner Bill Hawkins, and Town Attorney Derek Donnelly assisted in the discussion. After questions on the Town’s cost, Casey said that the agreed price of $2.4 million and transfer of the old garage includes the understanding that he will pay for the planned development at the new location, but only a predetermined amount of the cost of the hazardous waste cleanup at the old.

The highway garage vote was to be taken separately by the Board of Finance and the Selectmen, and there was some discussion about the wording of the motion. Finance voted first; the count was three to three. So there was no need for the Selectmen to vote. The proposal was defeated.

But there was still an agenda item for public comment. Two dozen citizens had attended, and they were still to be heard. Warren Packard said the proposal was like trying to make a silk purse out of a sow’s ear. He urged a brand new building on existing Town property. Gordon Stagg agreed with Packard and asked how the highway crew felt about the proposed plan. Tom Belmore also concurred, and he added that when a building is being built or renovated for public use, the project should pay prevailing wages even though that is not required when a private developer is the builder. He also urged that projects such as this should always go to referendum.

First Selectman Mack ended the meeting with an apology for not moving the project forward. She was concerned that Suffield would be known as a town hard to deal with. Kevin Casey thanked the boards for their work, especially the Permanent Building Commission, and commented that he had initiated the project at the Town’s request and spent the better part of a year on it, at considerable expense. After the meeting, developer Casey declined to make a further comment for the Observer.