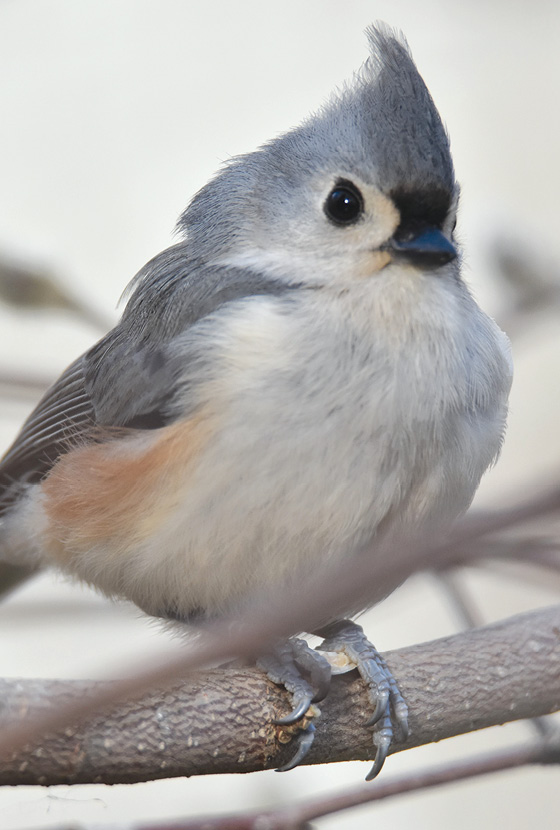 A Tufted Titmouse puffs up to keep warm in the winter

Some people just know how to beat the cold. My friend in high school was one of them. She had kinfolk from Vermont, which definitely gave her the edge in the sub-zero department. And, I suspect there was some Nordic blood coursing through her veins, as she and her siblings were tow heads, sauna aficionados and, built like Sonja Henie or Ole Einar Bjørndalen, definitely prepared to go the distance. I never willingly would sign up to race any of them up or down any hill in town, snow covered or otherwise.

At any rate, my friend had an arsenal of tricks developed over the years to beat the winter weather. My favorite was her refusal to turn on the heat until January in her maroon convertible Corvair that she drove around the backstreets on the way to school. Often I was lucky enough to be a passenger, and I was mesmerized by the dials on the dashboard, which looked way more hip than anything I had ever driven. So we had to keep ourselves warm by careening around corners, turning up the radio, talking about boys and blowing on our hands. That seemed to work.

Further discussion about keeping warm spilled over into our clothing and how to dress for the season. She maintained that we were to refrain from wearing any long-sleeved shirts or sweaters until November, and then adopt great self-restraint in the layering department. Less was more, and she and her siblings claimed never to be cold despite wearing just shirtsleeves when the mercury dropped and they were out stacking wood and creating their own Nordic ski track in their back forty. Frostbite was not a word in their vocabulary.

Nor was frostbite a topic of conversation at our house. Once the cold weather descended, my parents would trudge off to the slopes with us in tow. They had their own strategy for keeping warm, based on positive mindset and the layering school of thought. We had multiple layers of socks and liners in our mittens. We all wore duo fold waffle thermal long underwear which had been handed down from our ancestors and the elastic was shot. Despite being the only girl, I was stuck with the boys’ cast offs, complete with that whole fly scenario which didn’t thrill me. But our job was not to fall off the Poma lift and not to complain.

After snowplowing all day down the frigid slopes in our full wool ensembles, stopping every so often to scratch ourselves, we’d call it a day We’d wake up to the radiators hissing and the smell of wool wafting up the stairs from our assembly line of stocking hats, scarves and mittens drying out overnight. I don’t ever recall having any extras, so we’d get up and pull on the damp mittens, and off we’d go, ready to take on a new day of bitter cold.

As I pen this, the flock at my feeder is also ready to take on a new day of bitter cold. The local birds that do not migrate have adapted to the changes of season and are busy keeping warm. One strategy the birds use, which also adds to their cuteness factor, is to puff up to trap air in their feathers, achieving the same effect as we do when we put on our down jackets. This behavior helps them to minimize heat loss in the colder months. They seek shelter from the wind and have been known to roost in groups to fend off the cold. When it gets really frigid, they nestle their adorable heads under their wings and occasionally stand on one foot, tucking the other in as well. I always wondered about how their stick-like legs would fare in the winter, and I have read that they have some counter-current heat exchange system in which the veins and arteries are particularly close to each other, acting to heat up the blood more efficiently. That, plus having minimal nerve or muscle tissue in their legs, reduces their chance for frostbite.

So, despite having the antithesis of stick-like legs, I am cooped up more than I would like at this time of year. Fortunately, there is plenty of entertainment out my window as I watch the chickadees and titmice, as they keep warm and make it all look adorable. No frozen appendages, no chapped skin, no staticky hair – just bright-eyed puffballs of feathers waiting for the temperatures to rise. And, truth be told, I have thrown in the towel and my friend would be horrified as the heat is blasting in my car, and I am madly layering. Mum’s the word.