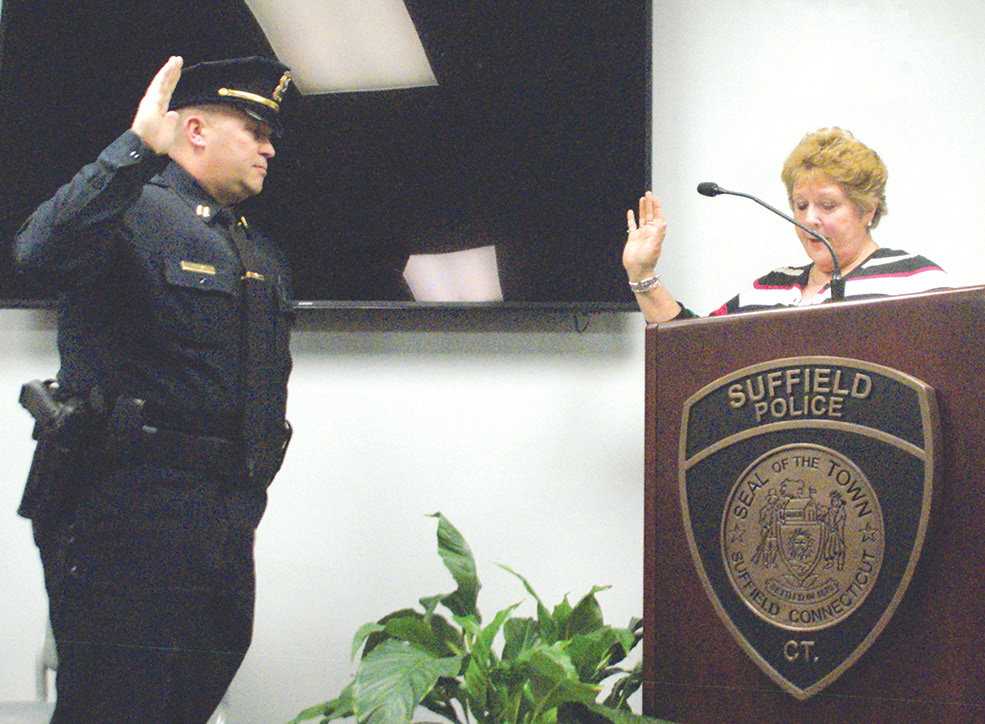 In one of her official duties, Suffield Town Clerk Kathy Dunai administers the swearing in of new SPD Captain James Canon, Jr.

Captain James Canon, Jr. was welcomed into the Suffield Police Department several months ago (September Suffield Observer, Pg. 7), but it took a few weeks to get the paper work settled. Finally, on the afternoon of November 7, the Department’s Zak Community Room was packed with friends and family and a diversity of visiting police officers ready to honor and celebrate the next step in the impressive career of this new Suffield leader.

First Selectman Melissa Mack said she was happy to have such an experienced officer to assist the Department in its continuing improvement. Police Commissioner Kenneth Pascoe said he thought Canon’s selection was an excellent choice. Chief Richard Brown added his welcoming comments and read an admiring letter from Enfield Police Chief Alaric Fox, who was unable to attend. Then Town Clerk Kathy Dunai did the official swearing in. Capt. Canon’s two daughters, Grace and Isabella, together pinned on his new badge. Canon’s wife Laura and his parents, James and Susie, were there to share the occasion – and many of the photos that followed. Cider and cake was enjoyed following the ceremony.

Capt. Canon graduated from Westfield State College in Massachusetts with a B. S. in Criminal Justice and earned a Juris Doctor degree from Western New England College. Never practicing as a lawyer, he spent 20 years in the Connecticut State Police, specializing in labor relations; he retired as Lieutenant Colonel. He has received specialized training at the FBI National Academy in Quantico, Va. Most recently, he served as the Executive Director of Internal Investigations and Security for the Hartford Public Schools. Suffield should be a pleasant change. The Canon family lives nearby in Windsor Locks.