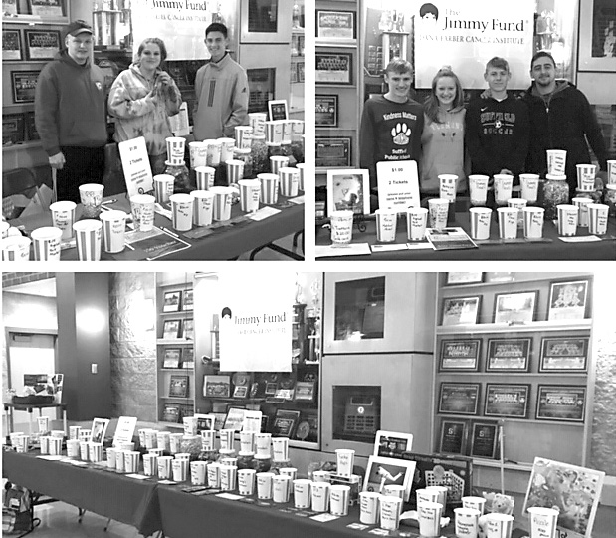 Kindness Crew Members are pictured at their recent Suffield High School fund raising project that collected over $1,000 for the Jimmy Fund of the Dana-Farber Cancer Institue.

Since cancer has affected many of our lives, The Kindness Crew decided that working with the Dana-Farber Cancer Institute along with the Jimmy Fund, would be the best possible choice to raise and donate as much as we can for cancer research.

“Dana-Farber provides expert, compassionate care to children and adults and is home to groundbreaking cancer discoveries. Since its founding in 1948, the Jimmy Fund has raised millions of dollars through thousands of community efforts to advance Dana-Farber’s lifesaving mission.”

Dr. Sidney Farber created the Jimmy Fund to raise money to support Dana-Farber Cancer Institute, the cancer hospital he founded in Boston in 1947. On May 22, 1948, “Jimmy,” one of Dr. Farber’s young cancer patients, inspired a movement on “Truth or Consequences”, a national radio program. Jimmy was a pseudonym to protect his identity—his real name was Einar Gustafson. Jimmy was visited in the hospital by star players from the Boston Braves. When asked what he wanted most, Jimmy said he wanted a TV so all the kids in the cancer ward could watch his heroes play baseball. Those listeners to the radio game show were so moved that they not only sent enough money for the television, but an additional $200,000. The additional money that was raised was put into a fund which was named “The Jimmy Fund.”

Jimmy Fund’s baseball origins later evolved into a longstanding partnership with the Boston Red Sox that began in 1953, the oldest and most successful charity relationship in all of sports.

We thank our community for their generous contribution to a very important cause!

The Kindness Crew raised $1,110.98 for the Dana-Farber Cancer Institute and the Jimmy Fund.

Next Article
New Musical Premiers at SHS
On December 5, 6, and 7, Suffield High School’s Drama Club had…