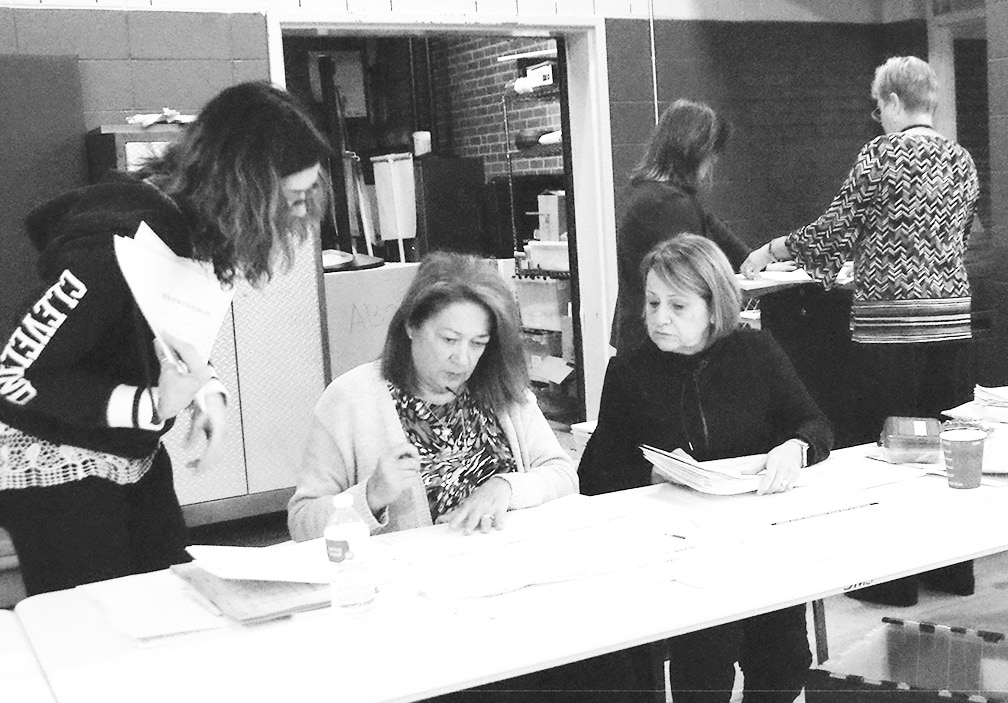 During the WPCA vote recount in the SMS gym on November 10, Moderator Lisa Shelanskas, left, checks with Kathy Perleoni and Kathy McKean, the ballot reviewers who were examining the absentee ballots. At the rear, Registrars Lynn Joyal and Darlene Burrell are passing reviewed ballots through the tabulator machine.

It’s been a long time since a tie vote delayed the results of a Suffield Town election, but that’s what happened on November 5. The following events included a few twists and turns.

As first announced, all the votes had clear winners, especially First Selectman Melissa Mack, who ran unopposed. But the Water Pollution Control Authority vote hit a snag. Six candidates were vying for the four seats to be filled (three members of the WPCA were continuing in office), and the vote produced three clear winners plus a fourth possible winner whose count was just one vote more than the next candidate on the list: 1,484 for Scott Guilmartin vs. 1,483 for Chris Rago. For such a close vote, Connecticut State Statutes require a recount.

So on November 10, Election Moderator Lisa Shelanskas supervised the recount, with four pairs of checkers carefully examining each of the 3,228 ballots (35 percent of the town’s registered voters) for irregularities. With regard to the WPCA vote, the only significant change resulted from the interpretation of one ballot which was not marked properly. For the WPCA vote, that ballot included carefully blackened ovals for two of the candidates, but only a diagonal slash through the ovals for two others. The ballot was reviewed by Moderator Shelanskas and the two Suffield Voter Registrars, Darlene Burrell (D) and Lynn Joyal (R). All three agreed that the slashed WPCA votes on that ballot should not be counted, especially since that voter was careful to fill in the ovals correctly for all the other offices. Removing the slashes lowered the 1,484 count to 1,483, leaving a tie vote between Guilmartin and Rago.

Until a few years ago, State Statutes specified that such a tie could be settled by a coin toss, but the law now calls for a revote within 21 days. In this case, Suffield attorney Ed McAnaney soon filed a suit in Superior Court on behalf of Guilmartin, requesting that the rejected ballot be counted, with Guilmartin declared the winner. Judge Susan Cobb held a hearing on November 22, but it wasn’t until December 30 that her ruling was published. Judge Cobb had examined the questioned ballot markings herself and ruled that their rejection was correct. By then the 21 days had already been far exceeded, so Suffield Town Attorney Derek Donnelly filed a request on the 31st for clarification of the time when the new vote must be held.

At the Suffield Board of Selectmen meeting on January 8, the Board heard Town Attorney Derek Donnelly’s report on the timing of the required vote, having attended a meeting in chambers with Judge Cobb that day. It was clear that it would not be feasible to combine the WPCA vote with the planned January 28 Town Referendum on the proposed new highway garage. On January 14, Attorney Donnelly announced that the revote would be held on February 25.